Story location has to be decided first. 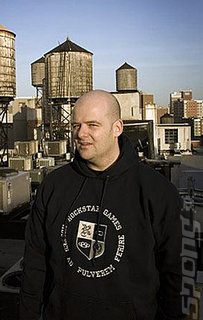 Rockstar Games' Dan Houser, one of the visionaries behind the Grand Theft Auto series, has told The Times that GTA V is on the cards, following a decision on which city to base the action.

The piece teases that the script will run up to 1,000 pages, which The Times notes is ten times as much as a feature film. ?We'll think of a city first, then the characters,? Houser said in a surprisingly rare high-profile interview.

The co-creator of the series also went on record to discuss the debate surrounding violence in computer games, which recently came to a head following Modern Warfare 2's release. The defence of the industry by MP Tom Watson was probably cause for Houser to feel a bit more relaxed about the subject.

?It feels at last like we?re moving on from [the computer games creates violence] debate. The audience is getting past 30 so it all becomes a bit silly. That?s not to say that all games are for all people; we?ve never said that. GTA has always been rated 18 and we?ve always been very happy with that.

?Nevertheless, we do get frustrated when video games are singled out and movies are given a free pass. Manhunt 2 was banned in the same week that Saw was released. The arguments become quite ludicrous quite quickly when people argue that games are somehow more dangerous than full-motion video.?

Speaking of Manhunt 2, the controversy of the game's ban could have been seen as a good thing for Rockstar. You know, free publicity and all that. But Houser actually said the denial of classification worked against the studio, as he candidly states that a game's banning ?means we?re not doing our first job, of making the investors back their money.?

But you're a Rockstar, Dan! What is this corporate nonsense? It's good to see that the reputation of being the creator of one of the biggest games series ever hasn't gone to his head though. Houser fully acknowledges the work of the studio team and points to that as the reason he's not in the public spotlight much ? to try and not take all of the credit.

?We?ve got, you know, 100 plus people, at least 80 per cent of whom are far more intelligent than me, and to start saying it?s me or Sam or the pair of us because we?re such crazy brothers just seems stupid. And it?s not fair or appropriate.?
Companies: Rockstar
People: Dan Houser
Games: Grand Theft Auto IV