A $20million Day for Bobby Kotick 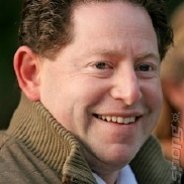 As if Activision Blizzard's Modern Warfare 2's sales not only setting records but also causing arguments (more on that later), wasn't enough to cheer CEO Robert - Bobby - Kotick, his salary deal including regular share options will certainly have added to the general joy.

A new SEC document has arrived that shows that on November 11th his options came into play once again. These enable him to get Activision Blizzard at a preferred rate and sell them at the market rate. Standard practice for executives and board members in big companies.