Satoru Iwata: Wii and PS3 are Neck and Neck 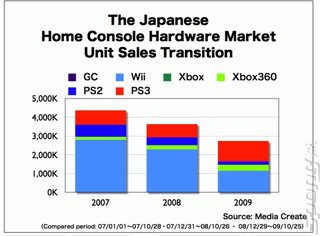 Nintendo president, Satoru Iwata, has explained that Wii and PS3 are 'neck and neck' in terms of sales in Japan. Mr Iwata also points out that, "However, the total unit sales of home console hardware were down last year and this year."

During his speech to investors, he also pointed out that, "A notable dip can be seen in sales of Wii this year; which is approximately half the size of last year. On the other hand, Sony's PS3 showed a good transition and they increased the unit sales by about 50%...

"Although we held more than a 60% hardware market share through last year - Wii has 42% and PS3 40% share thus far this year - so both machines are neck and neck in Japan."

He then mentions that, in the USA, except for the Xbox 360, all home console sales were down. He then mentions that the current 2009 figures for Wii sales in that region "only includes one week of sale following the markdown", and that "we are regain the momentum during the upcoming sales season, and we are well in the position to do so."

You can see the entire conference right here.

Our transcribers are working on it as we type this.