Halo Waypoint Could Include Gameplay Features 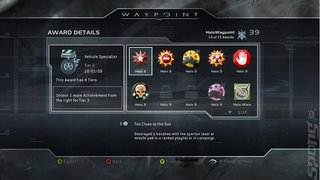 Halo Waypoint, the digital hub for Halo players soon to launch on the Xbox 360 dashboard, could provide fans with more than just lore, videos and information but could eventually have gameplay elements running through it too. Those are the ideas coming from Waypoint's creative director Jason Pace when he spoke to Kotaku recently.

The Halo networking application is being developed by Microsoft's dedicated Halo group, 343 Industries, along with game studio Certain Affinity, and is immediately intended for fans to watch videos, share their gameplay recordings, learn more about the franchise's universe and see premieres of anime Halo Legends. But Pace said that ideas to enhance the original games are being considered.

"I think it's safest to say that it would be a game-enhancing experience... It will be a much more deeply interactive one." Pace said, also stating that other ideas such as an interactive timeline with secrets and Halo characters running through the Waypoint are 'on the table'.

Features that Halo Waypoint will have when it hits on 5th November include a schedule of daily information and activities for fans to experience, as well as handing out 'Awards' based on how many Achievements a player has collected across the Halo games. Said awards are for bragging rights at the moment, but Pace told of future rewards included such as additional game content or Avatar material.
Companies: 343 Industries Microsoft