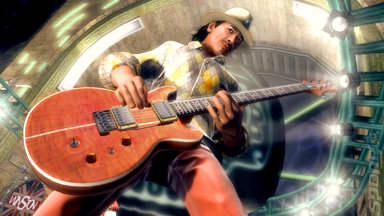 Guitar Hero.. Rock$$!
Activision Blizzard CEO, Robert - Bobby - Kotick, has taken his threat to stop supporting PlayStation a little further; he's looking to get away from consoles altogether at some point in the not too distant future.

Speaking at the recent Deutsche Bank Securities Technology Conference in San Francisco, Kotick states, "You should expect to see many of our products will be playable on the television independent of a console".

According to Bobby, that's "350 million users who may not be tethered to an Xbox 360 or a PlayStation 3..." No mention of untethering from the Wii or PC though.

He also went on to explain the money-making capabilities of Guitar Hero, providing a little historical insight as well as giving up his margins:

"In the last cycle of videogames you spent $50 on a game, played it and took it back to the shop for credit.

"Today, we'll sell you for $100 a guitar. You might add a microphone or drums, you might buy two or three expansions packs, different types of music. Over the life of your ownership you'll probably buy around 25 additional song packs in digital downloads. So, what used to be a $50 sale is a $500 sale today."

But what does Activision Blizzard look to make form this? Lots, that's what.

See, those microtransactions do pay off.