The specs have already hit the wires - no more Linux installs. 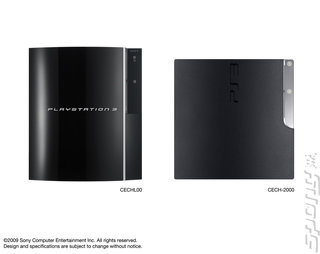 All Images (10) »
Sony's PS3 Slim is already available in pix and with specifications. Two of these are that there is no longer the ability to install another operating system such as Linux, and PS2 compatibility is not included. That said, the sub-Ł250 price point and the fact that Sony appears to have taken seriously the requirements of its fanbase indicate that some healthy competition above the Wii line is back on.

You can find the full and official details here. However, a quick look reveals:

- "This product is not compatible with PlayStation 2 games."

- "Users will need to use the separately sold 'Vertical Stand' to set the new PS3 in vertical position."

- "The new PS3 system will focus on delivering games and other entertainment content, and users will not be able to install other Operating Systems to the new PS3 system."

- "The new PS3 system is also equipped with the BRAVIA Sync feature. By connecting the new PS3 system and a BRAVIA TV with the HDMI cable, users are able to directly operate the XMB on PS3 using the TV remote control. Other functions include ?System Standby? that will automatically turn off the PS3 system when the BRAVIA TV is turned off."

- "The internal design architecture of the new PS3 system, from the main semiconductors and power supply unit to the cooling mechanism, has been completely redesigned, achieving a much slimmer and lighter body."

- "Concurrently with the release of the new PS3 system, SCE will modify the PS3 brand name from 'PLAYSTATION 3 to 'PlayStation 3'."

We'll be delving into these in more depth later this week.

Next they will take the Blu-Ray away...

Asapa 19 Aug 2009 14:47
4/8
I thought that they dropped PS2 compatibility before (a rather cheap move, as how much does it cost)? Not allowing Linux is another minus. No increased memory or GPU, no media TV features, we know who the leader is now, 360 -BR.

If Sony had included a credible Linux computer implementation as standard from the beginning they could have seriously dented Microsoft. If they included the the extra PVR media functionality as an option, or in a moderately more expensive version, they could have further hurt competitors on all sides. Sure the PC and AV businesses are protected, but we can buy many non game/non TV items for a cheap price from cheap competitors flooding the market. It was time for Sony to ditch it's AV and computer baggage, now it is too late to take advantage of this value adding to the burgeoning AV markets, and the cheap PC alternative to the computer market. The console was their advantage over these competitors. Now it is Apple's time, should they take it up.

If the GPU had been enhanced it would be good, but Nvidia's dx-11 feature level parts are said to be months away, so I doubt they have am low powered version in there. Isn't the GPU pre-CUDA, we miss out all around. Even current GPU's are less DX10.? then ATI's which are already partly DX11 featured, which is already like DX12. Confused, so you should be..