Archer Maclean's studio behind it 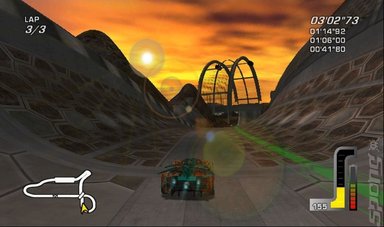 All Images (4) »
Bethesda has signed up Wheelspin, a futuristic racer for the Wii from Awesome Play, the developer headed up legendary (but not mythical) Archer Maclean.

Going by the screens, the game looks to be the same title shown off as 'Speedzone' on Awesome Play's website.

There are "inter-planetary tracks" on offer, alongside three modes and multiplayer options. The blurb tells us, "Whether you play in Solo, Race, or Battle Mode, you will find yourself racing around unpredictable race tracks at exhilarating speeds of up to 650kph!

"While Solo mode challenges you to beat times to unlock stages, discover short cuts, and find secret spanners dotted throughout the levels, Race mode throws you into a frenzied race against seven other cars across tracks that twist, turn, and launch cars through the stratosphere. Battle mode is an all out test of aggression versus mobility as you use an arsenal of weapons at your disposal in an all-against-all battle."

There are multiplayer options that include race and battle modes, with split screen and play for up to eight promised.

The game also supports input from across the Wii's control spectrum, with the Wii Remote, Classic Controllers, Nunchuk, Nintendo GameCube controllers and force feedback racing wheels all given a mention.

"Wheelspin was designed exclusively for the Wii - with the intention of pushing the hardware further than any other Wii racing game to date. You have to see the graphics moving to believe its coming out of a Wii - the visuals rush past smoothly at 60 FPS all in widescreen 480P mode", said Archer Maclean, MD of Awesome Play.

Archer Maclean is one of those old-school guys who you might not remember but your Dad might. He he's behind the likes of Dropzone, Jimmy White's Whirlwind Snooker and more recently Mercury Meltdown. He's also famous among the crustier circles of the gaming community for having loads of cars, so hopefully he's fairly well qualified to turn out a racing game.