And you thought there by dragons. 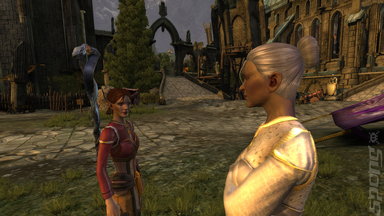 Sure, that's one garish headline. But the facts according to an Entertainment Software Rating Board (ESRB) certification description of Bioware and Electronic Arts' Dragon Age Origins are there for the naked eye to observe and probably be outraged at.

The description up on the ESRB tells us that in terms of violence, "A prisoner can be stabbed to death in order to steal a key; a merchant who overcharges refugees can be slashed in the throat; and a boy possessed by an evil demon can be killed off-screen".

So, stabbings, slashings and the killing of a man-child; those expecting folksy dragony myth are in for a bit of a surprise. Bear in mind that the slaughtered folks are NPCs - and the kid is possessed which presents a conundrum to the righteous: demonic possession versus cleansing?

What is likely to cause more uproar - especially in the USA where violence is constitutional but sex must only occur in Nevada* is the sexual content.

The description states, "During the course of the game, players are able to visit a brothel where a hostess asks what they are interested in. If players select "Surprise me," they can sometimes wind up face-to-face with a woman, a man, a transsexual, or an animal; sexual activity is never depicted during these brothel encounters."

Of course it isn't. The odd bit of merchant throat slashing is one thing, but the act of love, well, that's disgusting. It gets worse, or better if you like being outraged.

"Players can also initiate brief cutscene sequences in which couples (male and female or same sex couples) can be depicted kissing, embracing, and caressing one another as the screen fades to black. Though the game never features human nudity, one female demon character is briefly depicted with bare breasts."

Same sex caressing! Is Bioware preparing to be publicly flogged on Fox News?

vermillian 9 Nov 2009 21:04
3/17
It's an adult oriented game - hence the whole "The Dark Fantasy Epic" on the back of the box, the 18+ rating here in the UK. It made me laugh when the God Squad slated Mass Effect because you almost got to see some blue alien ass...

I don't see what the big deal is to be honest. There are worse games around for gore, sexual content and immoral actions. For me it makes a change to see games that aren't afraid to get gritty and realistic. The whole "whizz bang magic poof and everything is ok again" thing gets thin after playing virtually EVERY RPG.

vermillian 9 Nov 2009 21:06
4/17
It's a wierd one for me - I want to say excited but I also want to say bored. I work in Gamestation and while I'm at home and watching trailers etc i think it looks awesome and look forward to playing it (despite knowing it's not going to be the best game i've ever played as that's not what i expect it will be). But when i'm at work and i practically have to clean the jizz off the shelves when all the fanboys see the game on the back shelves ready for launch i actually quite hate the game, especially as it seems half the country phoned up today to ask the same god damned questions about it.

Dissapointed Fan 14 Nov 2009 06:29
6/17
I was eager for this game, but the fact that there is that much sex in it is just kind of disgusting! I mean, come on, its still a video game! Which makes me wonder, what need did Bioware feel that they absolutely must put something as vulgar as a brothel in a video game??

anon 15 Nov 2009 08:46
7/17
Its supposed to be what living in a medievil world full of magic would be like. Its not going to be bunnys running around in the streets wearing chastity belts.

Looking Glass 18 Nov 2009 11:43
8/17
Well I see this and think, the Gaming industry has grown about as popular (if not more so) than Hollywood and the Silver screen in the last decade. People are buying the new and upcoming hits by the handful, and at 60+ dollars a game, you're looking at the Video Game industry becoming top dog in the entertainment business. So when we come down to the facts, why do people become disappointed or angry? They're now able to pull off more in new titles than ever before, this does not only mean better graphics, interactive game play, more interesting stories, and whole new worlds to explore. It means boundaries can be pushed, just like the movie industry. There was once a time when sex and violence were rare if not entirely unacceptable in films, and now you can find almost anything in a movie. Same sex love scenes, bare breasts, and bullet wounds that made your stomach twist were all in movies long before this. Why when a game comes out, it needs to justify these things. The ESRB is of course a good tool for gauging which age groups should be playing these games. However, when you have the ESRB saying, "It's alright to be able to shoot a thousand people to death, but if we see so much as a nipple, we're going to have problems." It makes it hard to take seriously. And makes for a sad reality that America is A-Okay with murder, but the natural skin of a human being is off limits.

joezo 30 Dec 2009 12:54
13/17
isnt the comments the esrb make a little homophobic as they seam to put up with straights couples kissing but not lesbians or gays seriously someone could get offended by that (i personally are not homophobic)

KB 27 Jan 2010 23:36
15/17
The whole scheme is more open-minded then those who were brought up to follow strict morality. It's something that, does not infact change a person.. but relieves the mind to know that such things exist. That humanity does not need to live in a sheltered world. That we can take it as we will, and remember that It's just a program. That we can turn it off if we dis-approve.

Me 31 Jan 2010 03:02
16/17
Pretty sad that people get "outraged" over a game. I'd like to state that the game is rated M, so you must be 17 to buy it. Like a rated R movie basically, which nobody seems to be outraged about. And you don't have to play it if you're offended, and you have no right to tell anyone else that they may not play it. People have killed each other for centuries in the name of God, crusades and holy wars have taken more real lives than fictional ones in this game. And nowhere in the bible does it say " Thou' may not roll around clothes on." Which is all that's presented in this game. And demons have been constantly been portrayed as naked throughout history. If you can successfully argue that, try me.

lionfish 22 Apr 2011 04:40
17/17
I think it seems like a great game. And I'm totally not just saying that because there's going to be some sexy, badass sorceress chick running around.
Posting of new comments is now locked for this page.