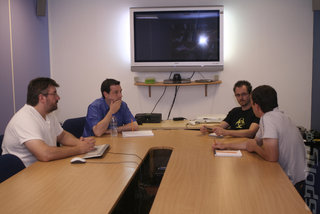 Midway Studio Newcastle as was.
While the UK government takes leaden steps and forces the games industry in the UK to prove yet again that it is comprised of talented people who can actually bring revenue into the nation, Midway's Newcastle studio has officially closed its doors. This is, of course, a pleasant way of saying that economic conditions piled on top of the parent company's struggles and compounded by government inaction have resulted in more than 80 workers in a strong industry being forced to seek work.

The closure of the studio - which had worked on Wheelman and was working on a new IP called Necessary Force, was highlighted earlier this week. This followed the attempts by Craig Duncan - the studio head - to find a buyer.

It was confirmed by Geoff Mogilner, Midway's head of corporate communications who stated, "We can confirm that we closed the Newcastle studio unfortunately. We had a period of time that was required by UK law to notify the employees of the pending studio closure."

The fact that Midway itself, like many game development and publishing organisations, has had to look at cost savings following the economic catastrophe brought about by insane banking practices is of course a key issue. That said, however, the slug-like speed of the UK government's recognition of the indigenous video games industry will surely result in more closures, and more talent bleed.

We wish all the Midway Newcastle staff the very best. And if you'd like to get in touch to share your feelings, please feel free to contact us either in the Forum or at feedback@spong.com
Companies: Midway Midway Studios Newcastle