New 'Xbox 720 Natal' Not for the Hardcore

So states US websites anyway 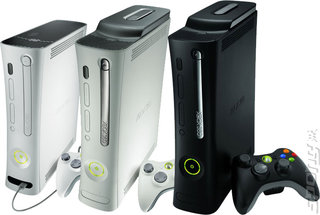 Next?
Last week Microsoft's Shane Kim pointed out that the launch of Project Natal would be as big as that of a console. Today 1UP has concluded that this means the full-body motion controller will actually be part of a new Xbox, which will hit the shops next autumn.

The report emerges from discussions on the site's podcast and concludes, "Microsoft will not only release Natal as an add-on for the Xbox 360, it will come standard with the next Xbox console.

"Yes, there will be a new Xbox console next fall."

To be so assured either means that either there is some serious inside information being fed via the kind of leak so hated by SCEA head, Jack Tretton, or rumour and speculation following E3 has reached fever pitch in one part of the world.

Adding flesh to the bone of the new Xbox Natal story, we're informed, "...we wouldn't be talking about the sort of hardware leap we've seen with Xbox (or most other) platforms in the past, and we're not talking about Microsoft ending one console cycle and starting another.

"The new Xbox console is said to be aimed directly at a mainstream audience -- and will launch before Nintendo is able to release its Wii HD. "

That sentence from the blog post suggests that someone in the know has indeed 'said' that the target audience will not be the hardcore gamer. However, given the range of what Shane Kim would call 'content experiences' on the system, the current Xbox already targeted at the mainstream. We've got to conclude, therefore, that 1UP's unstated source must mean 'aimed at the Wii'. We, could, of course, also conclude that this is conjecture piled on speculation piled on enthusiasm. Read the post yourself, here.
Companies: Microsoft

It does make sense though, I remember speculation a few years ago that both Sony and Microsoft would be release updated versions of their consoles for their next iteration, with faster processors, faster GFX, more memory and full compatibility. Particularly given the success of XBLA, Microsoft would do very well to allow all the XBLA games bought to work on the next console (since you'd have to assume that Live will be an even more significant part of it).

It's become the trend in consumer electronics and has worked fine for the iPod and the DS.

That said, what I think will be really funny is when MS and Nintendo both unveil their new console versions next year - Microsoft will receive a megaton of hate and abuse for 'ripping off their loyal customers', while Nintendo will be praised for providing extra features to their users...

SuperSaiyan4 15 Jun 2009 11:30
2/8
I am pretty sure the Arcade might be phased out and replaced with the 'Natal' edition.
more comments below our sponsor's message

Time to brush up on my Funk dancing.

Time to brush up on my Funk dancing.

Have you guys figured out that it updates the code each time you open an additional page or post, making the codes on the other pages invalid, instead of every open page having it's own unique code sequence.

macdaddie 25 Jun 2009 00:50
8/8
i think what he meant by "Microsoft will not only release Natal as an add-on for the Xbox 360, it will come standard with the next Xbox console." was that there is going to be a new console like the elite that features natal as a part of the deal not that they are going to release a completely new console next fall that would be to soon everybody doesnt even own a 360 yet and who can afford a new console when everyones loosing there jobs?
Posting of new comments is now locked for this page.