What will tomorrow's announcement bring? 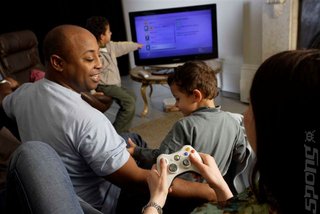 Microsoft might be about to announce the inclusion of some kind of Sky (or BSkyB, to give it it's Sunday name) functionality in the Xbox 360.

This comes from a report over on television industry news site, Rapid TV News, which states, "the long-awaited link up between BSkyB and Microsoft?s X-Box is at last going to happen".

The credibility of the rumour is helped by the fact that tomorrow Microsoft will be hosting a press event to announce a partnership that it says is, "sure to keep TV fans glued to Xbox LIVE."

It's a move that could provide Sky with a means to reinvigorate waning viewing figures, as a substantial slice of TV audiences have shifted their leisure time to video gaming. Importantly for Microsoft, it would be a major boost to the 360's credentials as a multimedia box, and more than slap in the face for Sony's PlayTV. This is, of course, assuming that a reasonably comprehensive service is provided - such an Xbox 360 version of the Sky Player, BSkyB's on-demand service currently only available on PCs or Macs equipped with Windows Media Player or Microsoft's Silverlight.

How this will fit with supposed emergence of BT Vision IPTV on the 360 - something that was supposed to happen last summer - is unclear.

We can, of course, speculate until the cows come home. There should be hard facts tomorrow, though, so keep your eyes on SPOnG.

SuperSaiyan4 27 May 2009 11:20
1/18
So if we can get Sky on our Xbox 360 then what is the point of Sky's viewing box etc? I am sure it will be restricted on the kind of Sky programs because I bet Sky don't want to lose millions of customers.

when i can download full seasons of programs of peep show, curb,24,lost and all my other favourite programs why pay throught the nose to have your timetable dictated to you?

sky will argue that they offer sky+, but ur paying a lot of money for this.

personally i will not be using the XBX/Sky combo, torrents all the way leek.

deleted 27 May 2009 14:53
3/18
This comes hot on the heels of Sky annoucing its to become fully unbundled for Telephony and Broadband, and shortly after the give customers a true uncapped usage, smells like Skys going to offer IPTV through their own network, i for one am really looking forward to this annoucement.

seriously SS4 do u sit down at your computer and try to be a massive retard?

So if we can get Sky on our Xbox 360 then what is the point of Sky's viewing box etc?

well not everyone has a 360, or even if they do want to run it through 360 for convienance purposes.

I am sure it will be restricted on the kind of Sky programs because I bet Sky don't want to lose millions of customers.

really? i thinkyour on to something there...companies DONT like to lose millions of customers, i thought it was the other way about.

they wont be losing customers dipstick, id anything they will increase customer base...XBX/SKY will probably run on the same basis as sky on demand atm(or whatever you call it)

just think before u open ur f**king mouth in future and do us all a favour.

yeh, but dont tell anyone.

the public gets raped in every hole from taxes, fees and insurance etc etc, especially in northern ireland for some things.

this growing culture of more for less is ridiculous so if i have to steal some media i will.

i know its not ethical, but if its easily available and it is not physically harming anyone I will.

*majin opens the doors for a flaming*

DoctorDee 27 May 2009 16:16
7/18
majin dboy wrote:
i know its not ethical, but if its easily available and it is not physically harming anyone I will.

*majin opens the doors for a flaming*
Not a flaming. But a voice of (I hope) reason. I am no fan of Sky/NewsCorp - but the problem with widescale piracy of any medium is that it is self defeating.

Program makers can only make money if they are given budgets to do so, those budgets come from broadcasters who pay for the programs on the assumption that they can recoup the costs from either subscriptions or advertising. If people pay neither - the shows do not get made, and we are left instead with an avalanche of reality TV, "talent" competitions and game-shows.

but surely there is enough money generated by the non piraters to keep industries like this going.

For example,i just downloaded eminem's relapse, i think it is a great album in in some ways i want to show my appricayion by buying the CD and inturn fueling that industry and E himself, however on the other i think people like Eminem and the industry already have enough$, so the tenner will stay in my pocket.

i know this is a very shallow example but it is also highlights my part in the equation. I believe job losses and economic downturn happen becasue poor decisions are being made at influencial levels. so you can say that pirating effects industries(which undoubatable it does), but not to the effect a lot of people think.

an emample ehich highlights this would be the fact that i will not be sitting down every thursday night at 9 to watch The Wire. EVERY thursday night, nahhh. i just wont watch it then. same goes for DS game DLing, il download chrono trigger and play it but will not spend Ł30 to buy it.

the cost of living continues to increase, at what point will you seek your entertainment for free?

i know they are not directly related(ie cost of living etc and the em=ntertainemnt industry) but i am thinking about this forma personal pov. s**t, if u were to do every thing totally legit each hole would be filled by a bigger dick.

but surely there is enough money generated by the non piraters to keep industries like this going.

Problem is your trying to justify it, and if i accept what you say and do it my self and then try and justify it and someone else agrees and they do and try to justify it then eventually it becomes so widespread that it doesnt matter because there is nothing left to pirate as no one makes money by making media.

and by your admission your say you do TV, Movies and Music so i assume you do Games, and by that the games industry is very fragile in comparison to other media it doesnt take many pirates to cripple indies, in fact i would guess the likes of EA and Activision are only a froce to reckon within the games industry because piracy has killed so much creativity from the smaller indies, unwilling to take risks because they need a mass mass market appeal rather than the smaller appeal of less popular yet still warrented genres.

i wont judge based on what you do as so many people do it, but i wont let you justify it either.

and i totally accept what you are saying, i guess it is just in my character to get something for free, i really feel like i have cheated the system, but i also know i am helping to destroy it.

i just dont have the money to play and listen to all the stuff i want, therefore i get it for free.

as i ahve mentioned before, i know the increased living costs/more for less concept and pirarcy are not really linked, however sometimes i just think we are pushed towards it.

but i suppose that just comes from a part of my character.

DoctorDee 28 May 2009 05:41
12/18
majin dboy wrote:
i just dont have the money to play and listen to all the stuff i want, therefore i get it for free.
The thing, I suggest, is to pay for what you CAN afford, and what you really like. If you steal what you would never have bought, the providers have not lost anything They will always argue that they have - but that is the kind of lying and opportunism that makes it hard to sympathise with them. But at least if you pay something, and choose the products you wish to support, it gives them a message about what kinds of software (music, games and video) is popular, and what needs to be produced.

if you steal it all, they think all of it is uniformly popular/unpopular, and can the innovative (expensive) stuff in favour of the sequels and lowest common denominator stuff.

Corporations may be amoral, but artists deserve our support.

Like i say im not judging in any way i myself used to Pirate PSone games and owned a doctor 64! and i dont think i paid for an album between 1999 and 2001, which wasnt good, but i too was at a time where my annual income was very little and i thought spending on alcohol and cigs was more important than supporting the industry, but as now i am in a position to afford the stuff i want and alot of what i dont, then i supose i could come across hypocritical, i do own an R4 and i have custom firmware on my PSP, but i use these simply to carry round more games (That i Own) on a single memory card rather than 4-5 Carts or UMD`s, and i will admit to downloading the odd Music track now and again, but that is with intention of purchusing the album or single later.

one thing i do remember was when i played PSone games that i had obtained for Ł2.50 a throw i had hundreds of games, and as such i didnt play them, i got little satisfaction from it, as i hadnt paid 30-40 quid per title i felt no need ot play them to death or at least complete them, i think during the PSone era i only finished, FF7 and Tomb Raider, thats the problem when you have access to 10-20 games a month you want your cake and to eat it, but eyes a bigger than your belly.

but like i say not judging, but i would say to put something back when you can like previous comments.

gripper 30 May 2009 08:49
14/18
Tv will die if it doesn't get a clue about modern business models. They should offer shows even whole seasons for DL at sub Ł1 per ep. That way those of us that don't want ads or to wait a week for the next so can do so - legally. Then the torrenters have no excuse other than being a cheap ass. How the "channels" figure into this is their prob. My suggestion is that they either become the "label" and fund content creation for a cut or a become direct distributing outlet