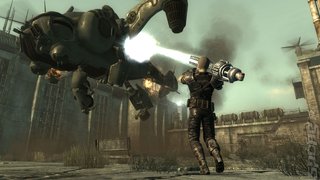 All Images (2) »
Speaking to assembled press down in London yesterday, Bethesda's VP of marketing and PR, Pete Hines, confirmed the release date for the upcoming Fallout 3 DLC, Broken Steel.

SPOnG was in attendance and has a preview of Broken Steel for your perusal.

The other big news at the event was the Obsidian-developed Fallout: New Vegas, set for release on the Xbox 360, PS3 and PC next year..

Details were a bit thin, but it was confirmed that the game is not a sequel, instead being a separate title set in the same universe. It has no impact on the project being worked on by Fallout 3's executive producer, Todd Howard, and his team over at Bethesda.

You can see a couple of Broken Steel screens below and more over with SPOnG's preview.
Companies: Bethesda
People: Pete Hines
Games: Fallout 3