Outrage at Dog Killing in CoD: World at War 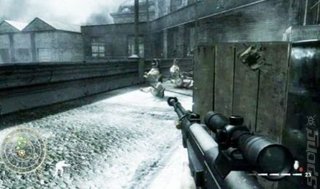 Over 100 students at the Academy of Notre Dame in Massachusetts, America, have protested the horrible violence in Call of Duty: World at War. Because hurting people is... wait, sorry, hurting wuvly fwuffy dogs is sick and wrong and bad!

Breanna Lucci, 19, rallied the school's Animal Rights Club (of which she is president) and launched a petition after she saw her brother killing dogs in CoD: World at War. She hopes to present the petition to Activision Blizzard.

"Killing dogs as a form of entertainment ... over and over again. That's one of the objects of the game", said Lucci to the Lowell Sun. "Parents need to know what they are buying their kids. Killing animals should not be a form of entertainment." Lucci didn't mention a problem with killing humans in the game.

Talking about the horrific experience she had when she first saw dogs getting killed in World at War, she said, "My little 12-pound pomeranian, Winnie the Pooh, is sitting next to him, and I'm thinking, 'This looks horrible!'" Lucci's other pomeranian is called 'Fluffy'. If you have a reasonably-sized handbag, you can fit a pomeranian in it.

"We don't think killing people is a good idea either", Barbara Vitale, faculty moderator of the club sagely remembered to add.

"I fear young kids playing these games and thinking it's all right to do this, because they do it in a video game", said Danielle Morin, 18. It's unclear whether Morin is aware that the game is rated 15/M and not meant to be sold to children. It's also unclear whether she thinks all gamers are complete morons who can't tell the difference between games and reality.

firstly its based on history where this s**t actually happened, im sure that in the heat of confict and large husky lunging itself at you with the intention of chewing on your face, well animal rights didnt really come in to it!,

secondly they aint real dogs! yes really its all smoke and mirrors using polygons and pixels and computery stuff!!!

sigh i really worry about this world, concentrate on finding real animal abusers and leave us geeks to kill CG dogs in peace!

that not even the point of the game

gamers dont copy wat happens in games or imatate it

and it is a 15 and there not killing real dogs there killing hex codes.....and grafics(typo)

Yip.... it's not as if it's cats that are getting pwned in COD... I apologise for saying 'pwned'. I do believe that just maybe this young lady has got her eye on a lucrative future career with PETA though. Frankly, if they can't evolve (or eat us outright) I've got no sympathy... and that's just the college girls.

DoctorDee 23 Mar 2009 15:10
4/8
Joel wrote:
gamers dont copy wat happens in games or imatate it
Some years ago, I bought a Mitsubishi FTO GPX Mivec because I fell in love with it in Gran Turismo.

I then drive it just like I did in Gran Turismo.

deleted 23 Mar 2009 16:13
5/8
DoctorDee wrote:
Joel wrote:
gamers dont copy wat happens in games or imatate it
Some years ago, I bought a Mitsubishi FTO GPX Mivec because I fell in love with it in Gran Turismo.

I then drive it just like I did in Gran Turismo.

Does that include throwing into the bankings on Fuji Speedway at somewhere around 120MPH?

DoctorDee 23 Mar 2009 17:18
6/8
haritori wrote:
Does that include throwing into the bankings on Fuji Speedway at somewhere around 120MPH?
Clearly not, I never got to drive it in Japan. I have driven a Nissan 200SX in Japan. Just in the city - no touge racing for me.

But I did throw the FTO into many other, non-banked, corners at speeds approaching 100mph. You could just accelerate up to most roundabouts, and whack the lock on, and it would just hunker down and go round, no understeer, no oversteer, no drama.

I've had a few decent cars, but the FTO was incredible! I often regret getting rid of it. It would get up to speeds on country lanes that I cannot match in my Clio 182, and couldn't come close to in my 250bhp MR2.

Rhodes 24 Mar 2009 18:18
7/8
I have lost all hope in humanity after reading this, dam how stupid can students in America be. I'm pretty sure people can distinguish between a video game and reality, well obviously they can't. Man that girl must have done some serious dick sucking to get people to sign that petition, nobody is THAT retarded are they?
There are far more games with more graphic violence than COD that have been going on for years, it really is a lost cause and so are their brains.

OptimusP 25 Mar 2009 08:56
8/8
There's only one rememdy for this. Put the girl in some forest area, give her a knife and let loose some wolves while also playing war-sounds in a close area.

Who's going to be it girl...you or the wolf!!!
Posting of new comments is now locked for this page.