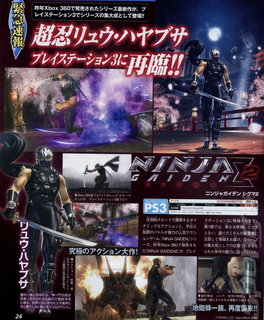 Scan via Kotaku
It looks like the supposedly Xbox 360-exclusive Ninja Gaiden II is making its way to the PS3 in the form of a Sigma sequel.

This comes from a scan of Japanese gaming bible, Famitsu, that has made its way on to the Internet.

The first Sigma game took the original Xbox version of Ninja Gaiden and threw in a few extras. It sounds like the follow-up will do the same. The new content will apparently include being able to play as Dead or Alive's Ayane. It's also being reported that the game will include PSN support.

Sigma II will, of course, be developed without the help (or, most likely, approval) of Tomonobu Itagaki, former head of the Ninja Gaiden series' developer, Team Ninja, and the creative force behind the games. Itagaki left Team Ninja's parent company, Tecmo, in a bit of a huff following the non-payment of bonuses for Dead or Alive 4 and 'personal distress' caused by the head of Tecmo, Yoshimi Yasuda.

Yosuke Hayashi, producer of Sigma (interviewed about the first game here), will head up development of Sigma II.

Sigma was distributed in Europe by Eidos. Given the company's acquisition by rival Japanese publisher Square Enix and the soon-to-be-completed merger of Tecmo and Koei, however, it looks likely that Koei will handle the sequel over here.