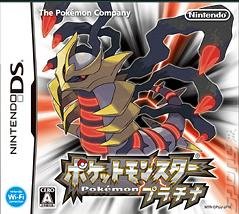 Nintendo's 2.4million Japanese selling Pokémon Platinum Version has been confirmed for a European launch on May 22nd this year.

Says Nintendo of the game, it is "a sweeping new adventure, set in the Sinnoh region of the Pokémon world, packed with new features ? such as new ways to play online at the Wi-Fi Plaza over the Nintendo Wi-Fi connection and the ability to save your greatest victories in the Vs. Recorder ? will electrify fans of the Pokémon series.

"A brand new Distortion World, governed by neither time nor space, also emerges, which provides a whole new gameplay challenge!"

Platinum offers the player the opportunity to "transfer Shaymin from your Pokémon Diamond Version or Pokémon Pearl Version game to your copy of Pokémon Platinum Version to discover the never before seen Sky Forme, with a new appearance, new attributes and special powers."