Games still in their infancy 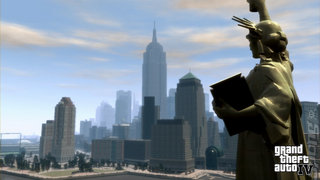 Liberty City, home of the free.
Rockstar co-founder (and lead writer on GTA IV) Dan Houser has said that he can live without the respect afforded film writers, he'll take the freedom of being able to ?make it up as we go along?.

In an interview with published on The Telegraph website Houser said, ?I think the medium is still very young. It's not a baby, but it's still probably an infant. So everything is growing and evolving as we go along and we're still figuring out how to do stuff.

?But I think that's as much as case as it is with design as it is with storytelling, even though some things may be lifted from cinema or books. But we're learning new tricks and getting better as games mature.?

Then, asked if he thinks it will be long before game writers are given the same respect as their opposite numbers in film and TV, Houser said, ?I hope it's long. It's really fun at the moment because we're not in any Academy and the medium's not codified. There's no accepted way of doing anything so that give us enormous pleasure because we can make it up as we go along.

?Movies and TV and books have become so structured in the way they have to approach things. Not working in that environment gives us enormous freedom. I'd rather keep the freedom and not have the respect.?

Well... we're not too sure about that. In what way are games not heavily structured, for the most part? You can run around Liberty City and diverge from the story loads if you feel like it, but you'll never finish GTA IV if you try to be nice to people the whole time. With certain exceptions such as MMOs and the construction elements of LittleBigPlanet, games are still dominated by their structure, not to mention the fact that publishers largely don't want anything too experimental that might harm their chances of raking in cash.

It's possible that Houser is instead referring to the creative process, but if he was he didn't bother make that explicit.

Finally, the article notes that, ?Houser is uncertain about where the franchise might be headed next?. Rockstar might have a lot on its plate with the upcoming DLC, but SPOnG will eat its sizeable hat if Houser doesn't know what's coming after that...

We can assume it will feature: a city filled with crime and violence in which individuals seek to make their way to the top of a dirty pile by making alliances, driving stuff, shooting stuff, screwing stuff, listening to licensed music and generally behaving like hard-bitten mavericks. That said, if the next GTA sees you setting up a hospital for disabled children, learning how to treat them, taking this knowledge to the World Health Organisation and then settling down for some gardening before dying quietly in your garden chair... well, that will be out of the standard structure.