Plus: other happy slappy facts 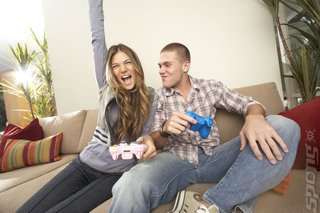 Because Microsoft's still all giddy about the launch of the New Xbox Experience, it's released some new nuggets of information about the update and Xbox Live. NXE, apparently, has boosted the number of new friends added per Xbox Live member by 33%.

Also of interest is the fact that in the week following NXE's launch, Live Arcade sales almost tripled. In the same week, the number of movie downloads went up 49% and the number of TV episode downloads increased 30%.

Avatars would seem to have gone down well. UNO, a consistently popular Arcade title which got updated to include avatars, saw a 650% sales boost in one day.

You can see the full list of factoids, courtesy of Major Nelson, below.

- If LIVE were a U.S. city, it would be the largest city with over 14-million members. The equivalent of New York City, Los Angeles and Chicago combined.
- Since the New Xbox Experience launched on Nov. 19 the number of new friends added per Xbox LIVE member has risen by 33%.
- Xbox LIVE is not just games: With more than 45 global network and studio partners, and Netflix in the U.S., we offer more than 30,000 movies, TV episodes and music videos in both high and standard definition.
- In the past year the average number of unique visitors to Xbox LIVE each day has risen 66%
- Movie downloads increased 49% and TV episode downloads were up 30% the week after launch
- Xbox LIVE Arcade sales almost tripled in the first week after the New Xbox Experience launched
- Avatar-specific titles like A Kingdom for Keflings registered the second-best first week of performance ever
- UNO which was updated to include in-game Avatars, saw a 650% increase in sales in just one day
Companies: Microsoft

SuperSaiyan4 11 Dec 2008 13:18
1/1
This is fantastic news however I find searching for content to take ages its not as fast as the previous layout.
Posting of new comments is now locked for this page.