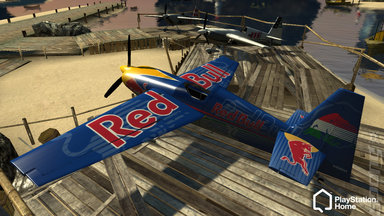 All Images (5) »
Sony has finally announced the launch date for the open beta of PlayStation Home, which will make the service available to one and all. The platform holder isn't wasting any time, either - the service launches worldwide tomorrow.

SPOnG was informed by a Sony rep that the launch will begin sometime in the evening over here in Europe, but a specific time wasn't available.

If you had any lingering doubt that Sony is treating home as a work in progress, let Sony Computer Entertainment's president, Kaz Hirai, put it aside. ?PlayStation Home is truly a promising network community service on the PlayStation platform, made possible with the powerful combination of PS3's overwhelming computational power and PlayStation Network that covers many countries around the globe?, he said. That's right, "promising".

Diesel and Ligne Roset will, as you would expect, offer ways to make your avatar and Home apartment look all cool and stylish - although Diesel may charge you up to ?1.50 (Ł1.31) for the privilege, depending on what you get.

Red Bull will offer "the very first consumer brand space". Initially, it will offer up the opportunity to take part in a simulation of a Red Bull Air Race, with more promised for early 2009.

The companies involved in moving pictures will be making use of PlayStation Home Theatre. Paramount will be using the feature to pimp Watchmen, with a greeting from director Zack Snyder to start with and merchandise such as T-Shirts with the smiley face logo, Doomsday clocks and character statues to follow. That will be topped off with a Q&A event that will feature cast members and "filmmakers" (no word on who) meeting press and competition winners in the Watchmen-themed environment.

Those with a half-way reasonable memory will recall that Xbox Live already carried out a similar Watchmen event in November.

There will also be a Far Cry 2 - themed space open from the get-go, with more for Uncharted, Warhawk, Motorstorm and SOCOM planned. Sony also says it is in talks with third-party publishers such as Electronic Arts, Ubisoft, Midway, SEGA and Atari to get more game-related areas up and running.

Once the service is available to download, a Home icon will appear on the XMB following booting of the PS3. Once downloaded, it will be accessible from the PlayStation Network column of the XrossMediaBar (XMB).

With LittleBigPlanet not exactly lighting up the High Street in terms of sales, and PlayStation not competing in the hardware price battle with either Microsoft or Nintendo, Home - and the word of mouth generated by the betas - is hugely important to Sony. Keep your eyes out for SPOnG's Home round-up coming soon.

To whet your appetite, take a look at the new images below.
Companies: SCEE
Games: PlayStation Home