Ubisoft does it again 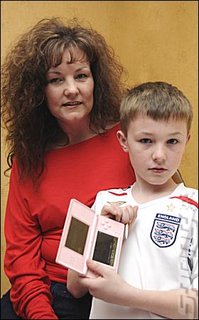 Mother, son and pink DS. (pic via News of the World)
You've got to love the national press. Pull out an apparently outraged mother who bought her son a year-old game with a couple of swear words in it and give Ubisoft and Nintendo a hard time about it.

Tonya Carrington bought Ubisoft's Scrabble Interactive 2007 Edition (inaccurately labelled Nintendo Scrabble by The Telegraph, News of the World and the Daily Mail) for little Ethan (8 years old) and was "alarmed" when she discovered profanities being used by the AI opponents.

Naughty words to found in the game included 'tits' (defined as "garden bird" and "an informal word for female breasts"), 'shit', 'toke' (defined as "a draw on a cannabis cigarette") and SPOnG's favourite, 'f*ckers' (apparently "a slang word for chavs" which earned the AI player, 'Camilla', a triple-word score!).

"The worst thing is that there's an age rating of 3+ on the box and no advisory warning about adult language on the packaging at all", Ms Carrington said.

"It's disgraceful. Scrabble is a game for families, but I've had to ban Ethan from playing this version because of the horrible words it uses.

"It's such a shame for him, because he loves Scrabble. Nintendo is on the Christmas wish-list of every kid, and parents need to be warned", added Ms Carrington, who obviously doesn't understand the relationship between platform holders and publishers.

Poor little Ethan's response? "I love Scrabble, so I was really disappointed when Mum told me I couldn't play it on the DS because of the rude words." Do you, Ethan? Do you really love Scrabble? Well, maybe you ought to ask for a copy of Ubisoft's Mind Quiz. Oh, wait. That might be a problem, because it was pulled from retail for use of the phrase, 'super spastic'.

Ubisoft, for its part, said, "We are sorry the game has caused concern, but it includes a "junior" option that stops it using unusual or offensive words." Mrs Carrington said she found no mention of such an option in the manual.

What seems most unfortunate to SPOnG is the fact that the mis-naming of the game in question has Nintendo getting bad-mouthed by the mainstream media, when all it is is the platform holder.

SPOnG is also appalled at the thought of the sort of words folk could come up with using the Scrabble board game! One SPOnGer sheepishly admitted that he once created the word 'willy' on a Scrabble board...

In related news, Nintendo has been mailing out copies of Animal Crossing: Wild World to the press to encourage them to import unlocked content from the DS game to Let's Go to the City on Wii. Apparently some Nintendo staffer or other had trained one of the characters to utter the phrase "How are you, N?a?? Oopsie...
Companies: Ubisoft
Games: Scrabble Interactive: 2009 Edition

deleted 8 Dec 2008 13:48
1/5
Hold on heres a thought! buy the kid the game new! and then it wont be anything than you or his older bros and sisters add!,
really no ones fault but the mother for not soft resetting the game, knowingly buying a second hand copy, maybe gamestation or who ever should of done this first (but times money).

They say no news is bad news, so Scrabble This Xmas DS number 1!!

tyrion 8 Dec 2008 13:55
2/5
Here's another thought. Don't have your son pictured in a national newspaper holding a pink DS. Children at school can sometimes be cruel.
more comments below our sponsor's message