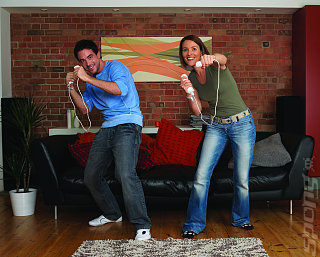 In a savvy little soundbite, Iwata emphasised Nintendo's sales success in the face of the economic downturn. "When the economy is strong, people tend to buy three things from the top of their wish list. But when things are bad, people often buy only the first thing on their list. Fortunately for us a lot of shoppers put our products at the top of their list", he said.

The Wii figure is most likely as much a reflection of the console's availability as it is its popularity. The console has remained difficult to get hold of since its launch two years ago. Even now, Wal Mart is feeling the need to point out that it will have plentiful stock of the console. It has said that it will have "tens of thousands" of Wii units available through its website as of today.

Nintendo of America's president, Reggie Fils-Aime, recently said that the company has a "good shot" at meeting demand over the holidays. It's getting Wii Fit that may prove problematic.

The Wii was unsurprisingly absent in Microsoft's crowing about its Black Friday sales figures last week. Nor did it crop up in the thoughts of SCEE's David Reeves in the same week when he responded (but didn't) to Microsoft's figures.

In the face of this crushing silence, noises coming from the Nintendo camp to SPOnG indicate that the one thing it's very aware that it as to avoid is, "arrogance".