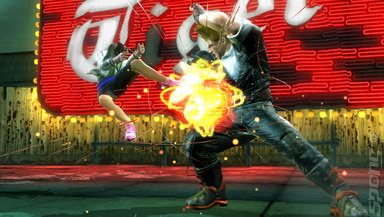 Tekken 6
All Images (2) »
Atari came out fighting yesterday at its Atari Live event in London, showing off and announcing a slew of 2009 titles.

First up is news that Tetsuya Mizuguchi, the famed developer behind music oriented games such as Every Extend Extra, is working on a music game for the Wii. If his past successes are anything to go by, this should be something weird and wonderful.

We also got a release date (well, month) for Ghostbusters, which Atari took off Sierra's hands. Expect it in June next year.

Next up we have a narrowing of the release window for Namco Bandai's powerhouse fighter, Tekken 6. Expect the game in Autumn 2009 for Europe.

Atari took advantage of the occasion to declare that it will publish arcade boxing title, Ready 2 Rumble Revolution in Spring 2009. The game is a re-packaging of Ready 2 Rumble Boxing Round 1 and Round 2. As you'd expect, Atari stated that it is "Tailored to take advantage of the motion-controlled realism of Wii." Don't expect too much realism, though - the series is known for its cartoony style.

Also on the Wii front was the announcement that the sequel to Family Ski will hit in February, complete with added snowboarding. The title, if you hadn't heard or made the mental leap, is Family Ski & Snowboard. Genius!

In a show of retail solidarity, Atari stated that it is bringing previously download-only games to bricks and mortar retail. Telltale's Sam & Max Season Two will be released on disc for the PC and Wii in 2009, collecting the five episodes that are available for download.

Back on the Tetsuya Mizuguchi front, the developer's Rez HD, Lumines Live! and Every Extend Extra Extreme will also collected for retail. The package carries the working title Q3 (Qubed) and is set for a Spring 2009 release on the Xbox 360.

The two releases support Atari's assertion that it is still supporting retail.

Atari will be bringing its PC RPG, The Witcher, to the PS3 and Xbox 360 under the guise of The Witcher: Rise of the White Wolf in Autumn 2009. It has apparently been "completely rebuilt pixel by pixel for the new generation of consoles" and will feature a new graphics engine. Atari also made a point of stating that there will be "a brand new combat system for thrilling dynamic action".

It was also announced that Atari will co-publish Demigod alongside Stardock Entertainment, bringing the game to European and Asian PAL territories. Developed by Gas Powered games, the title is a mash-up of RPG and real time strategy elements. It enables players to lead troops into action with their Demigod of choice, watching it level up as it ascends towards true godhood.
Companies: Atari Namco Bandai
Games: Family Ski Lumines Live! Ready 2 Rumble Boxing Rez Sam & Max: Season One Tekken 6 The Witcher