Was it an attempt to discredit Eidos Montreal? 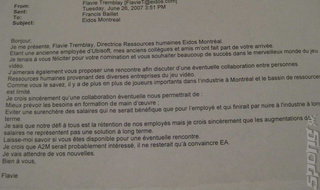 The leaked e-mail, via Maxconsole
Games industry executives based in Montreal, Canada, have dismissed theories - prompted by a leaked 2007 email last week - that studios in the area are conspiring to cap salaries.

The email in question was allegedly sent by human resources director, Flavie Tremblay, then of Eidos, to Francis Baillet, then the new VP of human resources at Ubisoft. It suggests that the two companies collude to restrict salary costs in the area, a growing hotbed of development thanks to government tax breaks. "I sincerely believe that a collaboration would eventually allow us to better provide for our needs in forming a workforce, and avoid a bid for higher wages which would only benefit the employee, and which would end up harming the industry in the long term", Tremblay supposedly wrote.

Ubisoft, for its part, has said that while the e-mail is real, the company never acted on it. "It's an email we received 18 months ago. We never followed up on it", said Cédric Orvoine, director of media relations for Ubisoft.

The e-mail suggested that A2M, the Montreal studio behind numerous licensed games such as Kung Fu Panda: Legendary Warriors, was already on board with a wage cap. However, Rémi Racine, president of A2M, said he'd not heard anything about the e-mail until last week. "It never crossed our minds. We're competing for staff, so this is not at all in our minds", he said.

According to the email, Electronic Arts would be the only major company left to persuade. The company verified that it had received similar correspondence, saying such a move would go against its values. "Colluding with competitors to restrict salaries in Montreal appears unethical and definitely contradicts EA?s core values", said Alain Tascan, VP and general manager at EA Montreal.

"EA is currently reviewing records to affirm our understanding that no representatives from our company participated in the meetings referenced in these letters, and that no one from EA colluded with competitors to restrict employee salaries", he added. Not quite a full denial that no one at EA entertained the idea...

There has been no comment put forward by Eidos or Tremblay herself on the subject.

If these execs are to be believed, then, the e-mail was sent but nothing ever came of it. One interesting theory is that leaking the e-mail was a spoiler tactic for hiring at Eidos. The e-mail was leaked last week, a few days prior to an open-house recruitment drive at Eidos Montreal. The e-mail is unlikely to have shone a favourable light on the company's hiring practices. It is also worth noting that Tremblay has since moved to Ubisoft, adding weight to that theory.

Except... Gamasutra claims that sources have told it the e-mail was sent off Tremblay's own back with no knowledge from her superiors. Given that she now works at Ubisoft, the e-mail looks less damning on Eidos than it does on her new company.

Similarly, the supposed source of the leak - while they would seem to have worked for Ubisoft at the time of the e-mail - was keen to cast a negative light on Ubisoft to Maxconsole, which has a photo of the mail. The source, apparently a mid-level manager, stated that e-mails to and from competitors were copied so they could be read by execs - not the most cuddly of practices, but a legitimate activity. The source has since apparently left the games industry.

So where does this tangled web leave us? Most likely with a troubled former games industry worker keen to upset his/her former employer, Ubisoft, rather than discredit Eidos. Hopefully the executives who denied a conspiracy can be taken at their words...