Friends and Invites for PC Call of Duty: WW Beta 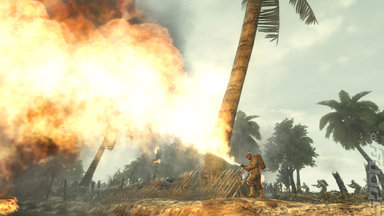 Activision (or Activision Blizzard) has released details of its Call of Duty: Modern Warfare beta - which means also the multi-player (and let's face it, that's what COD fans love).

Unlike the highly-prized because they were limited beta invites for LittleBigPlanet, COD:WW is available to the world and its aunties and their dogs. More interestingly for PC gamers - a core staple for the series - according to the official release, "First, the entire key authentication / master server paradigm is changing for the first time in a Call of Duty PC title. In CoD:WW, you will be authenticating in-game against a more global master server. This server will keep track of and maintain unique Profile names (like a screenname) which will be tied to your CD Key. So while username / passwords will not be required to play our game, you will have globally unique profile names."

But why? Why make this more complex? Calm down, here's why, "for the first time ever in a Call of Duty PC title, we're bringing Friends and Invites (which are typically console staples) to the PC. So we have built-in Friends functionality. You can add friends, filter your servers by Friends (see which servers your friends are playing in), join their servers, etc.

You can also invite any online friends to come join you in your current game. We didn't want the new Squad mechanics we've developed to get watered down on the PC, which is ultimately why we decided to bring you Friends & Invites, and thus globally unique profile names."

How do you get in? Via CD-Key. How does that work as you don't have a CD?

"These PC keys will be available to all registered users of CallOfDuty.com, including any new users who sign up after the PC BETA releases. These keys aren't intended to limit the BETA to a certain number of players; they are here to allow you to create these unique profile names for our Friends and Invites features."

Smashing. So, what happens to my pals at the end of the Beta? Easy, "All accounts will be deleted after the BETA, just like on the Xbox 360."

Right. This all seems like a mature series being handled in a mature way. How are we supposed to be all critical of that? Dang it!

PreciousRoi 22 Oct 2008 15:33
1/1
The codes for the Xbox 360 BETA are supposed to be limited too I guess...but a buddy of mine said he got some of them somehow...something about entering a bogus prerelease code, and getting back a valid BETA participation code...anywhoo, he gave me one, and, if you think that the CoD4 multiplayer gameplay, including the perks system, and the n00b-hammers (UAV, heli, air strikes) were cool, then you'll be down with this one. Personally I think they should have called it CoD4:2, or CoD4 WWII or something, because it looks like the same game in period drag.

Me, I detest both the perks system and the n00b-hammers (I call them that because if you're good enough to earn them, you should probably be winning anyway, so why do you need them, except to hammer on some hapless n00bs who were going to lose anyway, btw, in CoD5 they are a recon plane, a pack of attack dogs (kinda cool I admit, esp. the kill cam), and artillery) so this one is another big whiff (as in the sound a golf club makes as it fails to make contact with the ball) in the multiplayer department for me.

However, it does look very nice, and the levels seem well-designed, and very natural (no invisible walls and suchlike). I am looking forward to playing the single player on a high difficulty setting, thence to return it to the rental place, and deny countless invites to multi...pretty much what I did with CoD4.