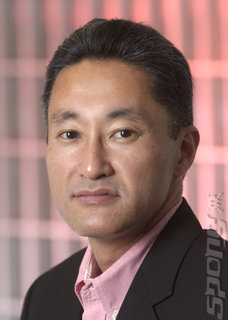 Speaking in an interview with the Financial Times Kaz Hirai, president of Sony Computer Entertainment, said, "The answer is yes, if you're asking, 'Are these the prices we're going with this Christmas?'"

This comes in the face of an Xbox 360 price snip that puts the Arcade model down to Ł129.99, less than half the price of the Ł299 PS3. Pointing to the PS3's built-in hard disk and Blu-ray drive, however, Hirai said, "When you really compare apples to apples, then I think we have a very good value proposition".

Sony prefers to add value to the PS3 at the existing price, rather than cutting its price.
It recently upped the size of the PS3's hard drive to 80GB in Japan, throwing in a copy of Gran Turismo 5 Prologue Spec III for the same price as the old, 40GB model.

While Nintendo and Sony are both busy saying they don't need to cut price, Microsoft's CEO, Steve Ballmer, has defended the company's Xbox business against the notion that cutting price was the only way to draw in customers.

Hirai also noted that after two years of the PS3 being on sale, "we're getting to the point where price becomes more important".

In the face of all that corporate bravado there was also a negative note from the FT. It noted that Fumiaki Tanaka, the head of Konami Digital Entertainment, had told the publication some of its distribution partners were struggling in the face of the Credit Crunch.

It's a bit like those catalogues that target poorer families by letting them pay weekly to make it affordable but at a 36% interest rate making it far more expensive in the long run!!!

How long will it be before Arcade owners decide they want a Harddrive? It's almost criminal what MS charge for the 120GB HDD addon, and unlike Sony their closed-proprietary system makes it impossible to go elsewhere. Same goes for people wanting to connect their console over Wi-fi - included in the PS3 vs an overpriced proprietary addon for the 360.

Then you come onto other issues like paying for a controller recharger and of course paying to go online etc! It soon adds up!

The 360 works out at more expensive than the PS3 even without taking into account the FREE Blu-ray player you get when you buy a PS3!!! Only families too poor to afford a fully-featured console would opt for the 360 Arcade!

In a recent interview Peter Moore admitted the only reason for not making a HDD part of the 360 spec was to keep the costs as low as possible to undercut the competition. The 360 was built cheaply, and that is shown in the quality of the hardware - 1 in 3 break! MS's strategy was always about get it out quick and get it out cheap - even today they ride on the extra numbers given to them by this headstart - and that is not a strategy in the consumer's best interest.

Sony could have easily have done the same route - abadon open-source technologies and release a PS3 without Wi-Fi, without a HDD, charge for online, charge for more things on the PSN Store, put in a cheaper cooling system that was more likely to break but cheaper to produce. They could have then charged huge premiums for proprietary HDD's, Wi-Fi units, Chargers, Keyboards, Headsets etc. Hell, they could have gone whole hog and released a console with no innovation that was based on subtly modified PC hardware and a DVD drive!

Personally I applaud Sony for sticking to their guns and I believe history will prove the PS3 to be the better console of this generation - despite what the anti-Sony fanboy bragade might like to spread across the interweb...

Did I mention that the PS3 has outsold the 360 by about 3 million units globally, when comparing both consoles from launch (i.e. not ignoring the 360's 12 month head start, which ludicrously MS always seem to do!)

HyperTails 13 Oct 2008 11:59
2/5
Ok PS3Owner, i'm gonna' have to agree with you on the whole 'cost' issue if you look at the two consoles on their own. Yes, it was stupid for Microsoft not to make the HDD mandatory for the 360, and yes, it was stupit not to allow people to upgrade their HDD to a 3rd party one. I also agree with pretty much what you say, except the last point. The PS3 hasn't yet outsold the 360, but make no mistake, it is catching up.

As for the article, there's no reason Sony should lower the price. Why? They are doing well so why lower the price? Its not good business to do that. And i'm sure the people that get a PS3 will realise what a fantastic machine it really is.

Daz 13 Oct 2008 12:05
3/5
I agree the PS3 is better value for money, I mean MS are charging for things Sony are giving you for free (on-line) or options with (headsets), I've seen 360 fanboys dis the PS3's 80gig HDD because MS have a 120gig HDD what they seem to have neglected to realise is the PS3 doesn't have proprietary HDD's and therefore can have more than 120gig's I have a 250gig HDD put that in ya pipe and smoke it MS.

Did I mention that the PS3 has outsold the 360 by about 3 million units globally, when comparing both consoles from launch (i.e. not ignoring the 360's 12 month head start, which ludicrously MS always seem to do!)

It's a valid way of comparing how quickly the consoles have sold, but it's utter b******s for comparing the market share or potential sales for a game, which is all the publishers are interested in.

It's a valid way of comparing how quickly the consoles have sold, but it's utter b******s for comparing the market share or potential sales for a game, which is all the publishers are interested in.

He's got a point, and it's clearly illustrated at VGChartz on the Hardware Since Launch Graph:

There was a point when it was a 4 million unit "lead" for the PS3, it all depends on LBP and Resistance 2 giving the PS3 the same upturn the 360 had on it's 2nd Xmas (I'm guessing that leap on the graph is Halo 3).

When you think that the 360 launched with no next-gen competition, had a relatively low price and had a relatively good selection of games, and think that the PS3 launched against the Wii & 360, was considered very expensive and had a load of negative press for it's lack of games, not to mention it's Europe delay, it actually makes the PS3's sales numbers to date even more impressive!

You can see why the Sony execs aren't sweating about sales, if the momentum continues then the PS3 will soon outsell the 360 (in real terms) without resorting to price cuts. This next few months sales will be very interesting, if PS3 sales fail to spike significantly over Christmas (which is the pattern on that graph) then I don't think Sony will be able to afford NOT to cut the price early in the new year...
Posting of new comments is now locked for this page.