Game over for Gameplay? 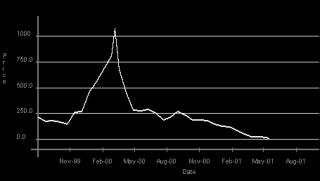 All Images (2) »
High profile dotcom retailer Gameplay saw its shares plummet to a record low of 5.25p yesterday when they announced the sale of their UK and Swedish boxed games divisions to their respective management teams, and the closure of their German retail arm.

The move will surprise few who have monitored the progress of the company, which was reliant on funding to remain in operation. The dotcom ?meltdown? meant that further funding was unavailable to the company. But sources close to the company reveal that it has consistently failed to achieve operating profitability despite high impact marketing campaigns. A store on Open interactive TV was said to be particularly expensive.

An attempted move into the high street in late 2000, to capitalise on the comfort factor of ?clicks and mortar? was short lived. The company re-branded eight of Dixons Jakarta stores, then closed them within months.

The company has subsequently tried to re-position itself as a technology company. But the on-line games market, while apparently thriving, has failed to deliver a viable revenue model to date. Gameplay?s retail operations remain the element of the business for which they are best known.

The sales generated Ł1 and SEK1 respectively, and will not have helped the company resolve its cash crisis. A statement by the company yesterday said, ?lower than expected proceeds from the sale of these assets mean that the company may not now have sufficient cash to reach profitability.?