Is the US Patent Office is kidding you... because we're not. 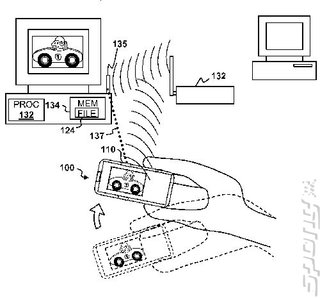 From the look of the images relating to the patent, this will result in a Wii Remote-like controller. Here's the description with our bolding:

"A hand-held electronic device and file transfer method are disclosed. The device may comprise a case, a processor and a memory.

"A case motion sensor and a remote device detector may be coupled to the processor.

"A communication interface may be coupled to the memory and processor. The processor may be programmed with instructions that, when executed cause the device to recognize a remote device, recognize a gesture from resulting from motion of the case, and transfer a file from the hand-held device to the remote device or vice versa in response to recognition of the gesture.

"Alternatively, the instructions may cause the device to identify a file to be transferred from a source to a destination, identify the source and/or destination, recognize a gesture resulting from motion of the case, and transfer the file from the source to the destination in response to recognition of the gesture. "

Sure, it's all about file transfer - but 'files' are of course strange creatures that can also contain instructions. The patent also mentions:

"The remote device detector 108 is generally configured to facilitate detection of one or more remote devices 130 that are in the vicinity of the hand-held device 100. The remote device 130 may be any suitable electronic device, e.g., a personal computer, laptop, game console, television, digital picture frame, and the like."

The patent was filed on June 26 and you can see it here.

Nov|'13
Oh Noes! Microsoft Might Not Have Enough Xbox Ones
Jan|'17
The Last Guardian
Mar|'14
Phil Harrison: How Xbox One will Win
Jun|'14
On Film: Sony's VR Headset Reactions

"I like beans, the magical fruit eating to eat, the more you motherf*cker! Butt to the bundle."