Not about GTA per se 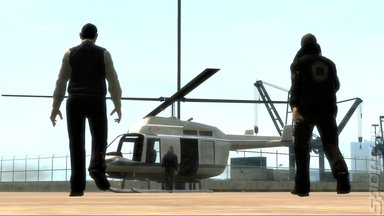 Speaking at the William Blair & Company?s 28th Annual Growth Stock Conference on June 17, 2008, Riccitiello states, "I would tell you that I don?t actually read personally a lot into Take-Two?s approach. I think that they are clearly a seller and they are cooperating as appropriate for their circumstance".

In terms of the extension of the bid, he explained to an audience member who asked why the bid was going to be extended based on Riccitiello's initial statement back in February regarding GTA IV's importance.

The EA man responded, "For clarity?s sake, I think you?ve got a slight mis-remembering of what we said." We're going put the SPOnG CorproBS translator over that, "For f**k's sake man, that's not what I said at all, you idiot", now moving on.

Riccitiello continues, "We were extremely explicit that there was no possibility whatsoever that we would be able to acquire the Company or close the transaction prior to the release of GTA IV".

Okay, here's what he said in a letter to Take-Two's Strauss Zelnick on February 19th 2008, "We are prepared to move forward immediately with formal due diligence and the negotiation and execution of a definitive merger agreement and believe that with adequate access to the necessary information and people, we can complete both in approximately two weeks."

This followed explicit mentions of GTA IV in the same letter, "We believe Take-Two?s current share price already reflects investor expectations for a strong release of GTA IV as well as the longer-term issues that Take-Two faces. Once GTA IV ships, Take-Two will again be dependent on less-popular titles and face increasing challenges to compete with larger and better-capitalized competitors."

Also... "With GTA IV shipping on April 29, development on this important title must now be essentially complete. We believe now is the right time to complete a transaction with minimal disruption for Take-Two."

He continued in his response to the July 17th meeting, saying, "What we said is we wanted to close the transaction in time to affect holiday sales for some of the games like Midnight Club, catalog for GTA and others.

"And so the reason we?re continuing to extend it, that was our plan all along and that was the way we described it at the time. Does that answer your question? I mean I can go on a little further."

He doesn't need to really, back in the initial bid - post the Zelnick Letter - the following was indeed stated, "We?ve waited to ensure that our proposal did not disrupt development on GTA IV. The game is scheduled to launch in about two months, which means the core development should be essentially complete.

"A timely integration would give a big boost to Take-Two?s games that are scheduled for release later this year and for their entire catalogue leading into the holidays."

So, the deal is still on and Take-Two is a 'seller'. Let's hope that delayed Xbox 360 DLC doesn't extend things even further.