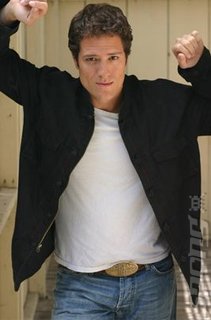 This is Niko Bellic
The actors who play Niko and Roman Bellic in GTA IV need new agents. The video game industry needs to look at its contracts before someone sues big style. We have an amusing video of the real life Roman trying to rent himself out.

Why do Michael Hollick (Niko) and Jason Zumwalt (Roman) need new agents? Well, they aren't getting residual payments for their work in best-selling game. According to The New York Times, Hollick was "paid only about $100,000 over roughly 15 months between late 2006 and early this year for all of his voice acting and motion-capture work on the game, with zero royalties or residuals in sight."

But Michael isn't bitter - well, not much. He also knows not to burn any bridges, telling the newspaper, "I don?t blame Rockstar", he says politely,"I blame our union for not having the agreements in place to protect the creative people who drive the sales of these games."

"Yes, the technology is important, but it?s the human performances within them that people really connect to, and I hope actors will get more respect for the work they do within those technologies."

Maybe a harder negotiation would have been in order because having asked about residual payments early on, he was told "that was not a possibility", and left it there.

However, it is unlikely that the video game industry will be able to get away with practices such as non-payment of residuals to not-quite-famous actors in the long run.

Mr Zumwalt - did not opt for the interviewed by The NY Times style of bringing his case to attention. He went to Youtube. "Yeah", he says, "I'm in the biggest video in the world right now, and I'm not making a goddam cent in residuals..."

We know which of the two we'd hire for SPOnG's forthcoming blockbuster Yokohama Motor Mama.

but seeing as he was the main character in the biggest entertainment release ever he should have got at least $1,000,000, but at least his name will live on in gamers head forever, look at david hayter, wonder how much he got paid for mgs1?

I understand where he's coming from, but he's got to be realistic. While games are bigger than movies money wise now, they are created by a huge team of people who all need to be paid, let alone the stock holders. He should receive some royalties though.

schnide 21 May 2008 15:42
3/13
Actors in movies drive tickets sales. Gamers couldn't give a three-headed monkey who appears in motion-capture and voice acting roles, and that's why developers don't need to pay those actors the big bucks. I think $100k is pretty reasonable for the work he did, but if he doesn't like it, he'll just have to breeze into the Hollywood studio gates and go back to commanding $5 million per picture.

Who is he again?

Who is he again?

Solution to this, the Midna-technique: have the characters brabble some random s**t and let everyone just read the text. Voice-acting and you learn to read!

config 21 May 2008 16:51
5/13
Residuals wouldn't really work too well in games as they do for movies - you've only got the initial launch, a budget release and then maybe a super budget - each doing its biggest sales in the just a few weeks then fizzling out.

Movies, on the other hand, have the theatre, DVD and Pay-per-view releases - granted, the former and latter have a short tail. However, the DVD and then the TV rights can just keep on going for decades.

Anyway, great vid. Had me LOLing. Confirmed my suspicious that the voice actors weren't Slavics. Shoulda got Goran Visnjic - he'd have cost R* more, but at least the accent wouldn't have been so ridiculously over the top!

DoctorDee 21 May 2008 17:14
6/13
config wrote:
Residuals wouldn't really work too well in games as they do for movies
I don't think these guys are looking for the long tail. I just think they think, "Someone's making LOADS of money here, and it's not me".

Plenty of actors work for a fixed fee or day rate, so this whole idea that voice actors in video games will have to be paid a percentage of profits is opportunist bullcrap. Will the ones who work on games that tank be happy to be paid three shades of f**k all?

irritant 21 May 2008 17:18
7/13
"I don?t blame Rockstar", he says politely,"I blame our union for not having the agreements in place to protect the creative people who drive the sales of these games."

Wow! If I'd realised it was him doing the voice, I might have actually bought the game!

Is this guy real? He thinks his creative contribution is what will drive sales of the game? Not the millions of pounds spent on publicity, the positive reviews, the technical innovations, hype, previous "good form" of the prequels, lack of any other games on the target platforms?

If you ask me, it sounds like they paid him way too much. They could've probably given him a tenner and a hot meal.

PreciousRoi 22 May 2008 01:16
8/13
Yeh, its not as though the guy didn't, or shouldn't have known that GTA IV was gonna be a mega-blockbuster...I mean, the time to do the bitching was prior to signing the contract, leaving R* free to offer the 100K to someone else...I mean, do you think there's a shortage of people out there who'd be willing to don a fake Slavic accent for that kind of lettuce?

I sure as f**k would...and I wouldn't be crying about it later on YouTube either...

You hear that R*? Next time you need someone to do some piecework for yas, ring me up...I'm easy.

fdsfds 22 May 2008 02:40
9/13
Dude, it was fifteen months of work. Voice actors make a s**tload of money. He should have made more than he did. His contract should have called for residuals or more pay.

Whatever. The internet is full of experts for forget everything I said.

But WHY do they make a s**tload of money?

In a free market, there are PLENTY of people who would happily do that job for that money. It wasn't 15 months of working every day. He got plenty of time off to go to the beach, or do other work. And even if it was 15 solid months, that puts him on $80K a year for sitting in an air conditioned studio, reading.

There are people who get under cars, clean drains, dig ditches for less. Many of them capable of sitting on their asses and reading.

nha 22 May 2008 13:13
11/13
He never pushed the residual payments thing because if he had they would have simply found someone else - thats the reality of big business... and he wanted the stardom/publicity of playing the top character in the best ever selling (shouldnt be!!) video game. Actors in films who earn 8-30 million should be ashamed because they are creating exactly this kind of problem - why dont you frikkin pay the computer artists more! I know someone who worked on this game and they are cheesed off at the small bonus they got and they still dont know if they're gonna be getting any royalties. And the frikkin president of r* drives a ferrari to work - what a t**t!! No way I'd work for that guy.

Tim Smith 22 May 2008 13:31
12/13
nha wrote:
I know someone who worked on this game and they are cheesed off at the small bonus they got and they still dont know if they're gonna be getting any royalties.

Get your pal to send me an email about this whole thing would you?

p 26 May 2008 19:07
13/13
Now that game and their voices are out in the public domain, (if they tread carefully) could get a much bigger cut for the DLC. Unless that's already in the can.
Posting of new comments is now locked for this page.