Skate for Wii and Tony Hawk to be Re-Invented

Wii version to be Balance Board compatible 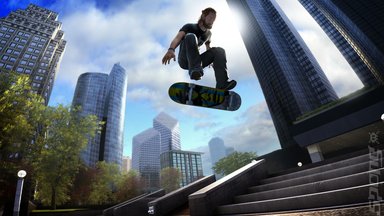 Cool, skateboard wars... we love those nearly as much as "Our version of GTA sold better than yours in Andorra! wars.

This one sees EA's skate. announcement up against Activision Tony Hawk announcement! Sweet.

Electronic Arts is set to bring a spin-off of skate., dubbed Skate It to the Wii and DS, throwing in Balance Board compatibility for the home console version.

No specific dates have been given, but EA says it will ship the games inside 2008.

EA's Black Box studios, which developed the first skate. game, will spearhead development. Scottish developer Exient (which has produced several handheld titles for EA in the past) is helping out with the DS version, while EA Montreal is lending a hand with the Wii version.

So, why a fresh game instead of a port? The game's executive producer, Scott Blackwood, said in an interview, ?We know a growing number of gamers have more than one next-gen system and we wanted to make sure that skate fans who have already played skate. got a new, quality skateboarding experience re-imagined for their other favourite game systems? much like what the team sought to accomplish on the other gaming systems.? Interesting to see that EA is specifically developing for a two-console owning audience...

As for the approach to building the Wii version, Blackwood said, ?In order to retain the same great feel and physical accuracy of skate., the team began by taking the core of the skate. engine and migrating it to the Wii. Most importantly; however, we've been able to bring our physics based skating, animation, camera, and award winning audio engines over to the Wii (Hall of Meat anyone?).

Built around that foundation is all-new technology specific to the Wii - not the least of which is an intuitive way of controlling your skater built around the Wii Remote. And yes, we are supporting 480p and Widescreen.?

It was also confirmed that the Instant Replay function will find its way to Skate It.

The Wii version will feature local multiplayer, while the DS version will have ?Single Cart, Multi Cart and WiFi multiplayer modes?. There's something else brewing, too. ?Skate It NDS will also have a few new unique online sharing components which we'll be speaking about at a later date?, Blackwood said.

As for the Balance Board... not a lot has been said. Blackwood offered, ?if you want to really feel your carves and control your manuals, I'd advise you to skate a Balance Board version of the game.? He also confirmed that the game can be played without the peripheral.

EA isn't the only company that has its eye on Nintendo and skateboarding. Speaking in a conference call, Michael J. Griffith, president and CEO of Activision's Publishing Unit, said, ?As for Tony Hawk, we are reinventing Tony from the ground up. We currently have two independent developments underway. This year we?ll launch the first of these as an exclusive Nintendo DS title that utilizes new technology not yet seen on the DS. The second release will launch in fiscal 2010. This title will have two years in development to deliver the kind of breakthrough this franchise needs. For competitive reasons, we?re not going to talk about it today but we are very bullish on the kind of innovation this will bring and this won?t be your father?s Tony Hawk.?

It sounds like the rather excellent skate. has prompted Activision to pull its finger out.

A full announcement of the game will be made at an EA press event on Thursday.
Companies: EA Black Box EXIENT Electronic Arts
Games: skate.

deleted 12 May 2008 17:02
1/1
EA wrote:
So, why a fresh game instead of a port? The game's executive producer, Scott Blackwood, said in an interview, ?We like to bleed genres and franchises dry, this way we can sell the same game twice!!
Posting of new comments is now locked for this page.