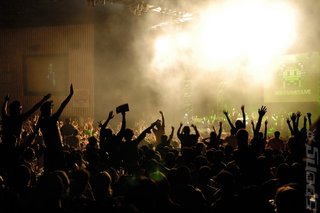 All Images (4) »
SPOnG is hoping that this year’s London Games Festival delivers the goods, with plenty of industry and consumer events planned for the capital on 22nd - 26th October, including the videogame BAFTAs and an awesome performance of ‘Video Games Live’ at the South Bank centre performed by the London Philharmonia Orchestra.

Video Games Live is a concert celebrating the most memorable music from the biggest games, such as Halo, Mario, Zelda, Final Fantasy, Warcraft, Myst and Sonic and is set to be the grand opening event for this year's London Games Festival.

The performance will take place at the Royal Festival Hall on October 22 at 7:30pm and tickets are now on sale - so go get them quick as this event is sure to sell out.

The concert is to be hosted and conducted by co-creators Tommy Tallarico and Jack Wall. As well as featuring the prestigious Philharmonia Orchestra, a full choir will also perform live alongside exclusive video footage and music arrangements, synchronized lighting, solo performers, electronic percussion, live action and unique interactive segments.

What is sure to be the highlight of SPOnG’s night will be the special retro Classic Arcade Medley set to feature more than 20 games including classics such as Pong, Donkey Kong, Dragon's Lair, Frogger, Space Invaders, Duck Hunt and Tetris.

There’s also a cosplay contest, but the less said about that the better. Get tickets on 0871 663 2500 or at the South Bank Centre’s website.

For more info on any or all of the classic videogames mentioned about, head over to SPOnG's dedicated game pages via the links you can see at the top right of this very page.