Call of Duty 4 Beta COULD Be Open To Europe

May still be available to PAL gamers 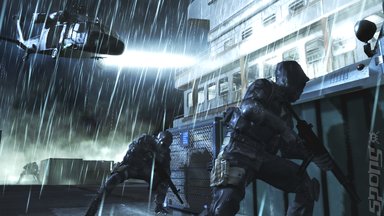 European Call of Duty fans can breathe a sigh of relief today. Infinity Ward has revealed that the Call of Duty 4 multiplayer beta, set to launch on the Xbox 360 later this month, is not a confirmed U.S. exclusive.

A posting on Charlie Oscar Delta informs us:

"As for who is eligible for the Beta, there was some confusion caused this week stating that the Beta would be US-exclusive, however that statement was premature, because we have not finalized final details on who would be involved in the beta at this point."

Of course, that still leaves open the possibility that Europeans will be excluded from the beta in the future, but we can rest easy knowing that, for the moment, we don't know.

This comes following a representative from Activision telling us of the beta yesterday, "I can confirm it's U.S. only." How Activision and Infinity Ward got their wires crossed is still unknown.

To find out what SPOnG thought of CoD 4 at Activision's recent preview day, follow us this way. When you're done there, you can read more in SPOnG's interview with Infinity Ward's head of development, Grant Collier.
Companies: Activision Infinity Ward
Games: Call of Duty 4: Modern Warfare