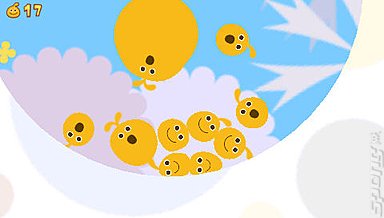 Screen from LocoRoco on PSP.
Sony has confirmed that LocoRoco is coming to the PS3, complete with motion-sensitive controls.

The news comes from Sony's PlayStation Premier event being held in Tokyo. The game is tentatively dubbed Buu Buu Cocoreccho! by LocoRoco and will be available through the PlayStation Network.

Sony says of the game, "It's LocoRoco, but it's not -- a peculiar extra chapter." It further (confusingly) added, "Even if you don't play it [as in control the game], the world and the LocoRoco will play [as in both playing amongst themselves and as in playing back like a video] on their own." Think of it as a goldfish bowl of adorable little LocoRoco in your living room, with 200 of the little guys to frolic with each other.

Beyond that and the fact that the game will make use of the SixAxis's motion-sensitive controls, not a huge amount is known. Sony didn't say when the game will be out, but it's said to be 95% complete.

You can read SPOnG's review of the original PSP version of LocoRoco here, then find out more about the game on SPOnG's dedicated game page.

but i really liked LocoRoco and with the motion sensing control it might work out nicely though, still its no benifit to those waiting for MGS4 and Gran Turismo 5,

Then they don't have to play it. I think they should be glad that they had to wait, to be honest, because once they've completed/got bored of MGS4 and GT5, they're just going to have to start waiting again, until MGS5 or GT6 come out, which will probably be a long time - so I feel sorry for them! Plus they spent Ł400 on a PS3, when they have nothing to play.

mrAnthony 18 Jul 2007 17:26
3/3
hmm, i LOVED locoroco. but this sounds alittle... disappointing. one of the reasons i bought a ps3 was the hope of locoroco. ( it just makes sense) and this sounds like nothing more than a playable screensaver.
Posting of new comments is now locked for this page.