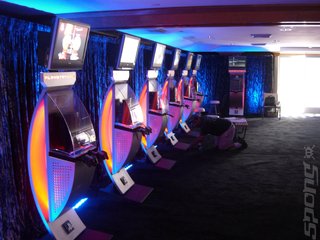 All Images (40) »
SPOnG had a somewhat cheeky nosey around a few of the booths being set up for this year's contracted E3 event, with some mooching around select venues in Santa Monica, without question America's largest and most upscale crack den.

You can see the pictures here from Sony Computer Entertainment, Microsoft, Electronic Arts, Take 2 and Rockstar's hotel suites, along with a few shots of Microsoft's impressive outdoor auditorium at Santa Monica High School, the venue for this evening's presser, right here. Here's hoping that thunderstorm that's forecast holds off till the event is over and we are all safely ensconsed in a nearby bar to chew the fat about, pick apart and deconstruct whatever announcements Microsoft hit us with.

Working a classic distract and snap maneuver, Stefan would enter the booth and quickly locate the person he thought likely to be the alpha security person, then attempt to befriend them while asking long and tedious questions. The questioning, ideally, would see Stefan use one of his special moves, learned from Colombo off the telly, leading the security person in one direction with a wagging of a finger and a gentle is persuasive hand on the back.

Adam could then snap at will, the remaining security assuming that as Stefan Colombo was alright with the boss, his portly accomplice could chisel out a few snaps of the venue. With some rather good results, we hope you'll agree.

We even snapped a few pics of the innards of a PlayStation 3 demo pod, in the vague hope that someone who knows about such things will be able to say something in the forum about them running final code/not running final code/being hooked up in a funny way/something else.

We were only finally ejected from EA and Take 2's demo areas actually, which we thought was pretty good going, all in.

Enjoy the snaps and do be sure to leave us messages of encouragement in the forum.
Companies: Electronic Arts Microsoft Sony