The Charts: Forza 2 Versus DiRT - Brrrmmm!

The top of the Charts parks up 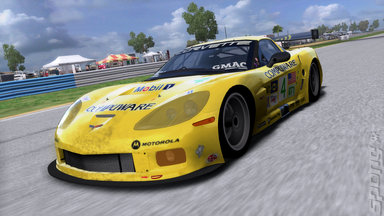 A car. It goes fast. True story.
Microsoft's Forza 2 remains in pole position this week's charts, beating out its racing rival Colin McRae DiRT. It's not a bad push, considering that the 360-exclusive's sales are down 34% on last week's launch.

Eidos's Tomb Raider: Anniversary and Disney's Pirates of the Caribbean: At World's End are also non-movers this week, retaining their spots at Numbers 2 and 3 respectively. It's a close call, however, with a measly 183 sales separating them.

Number 4 is where Codemasters' Colin McRae DiRT pulls in. It's available for the PS3, PC and 360. It turns out, however, that 360 owners have a much greater affinity for driving on clean, well-marked roads than getting mucky with rally driving. The Xbox version sells just over half the number of Forza 2.

Nintendo is the most represented company in the Top 10 once again. The stubborn Wii Play is still hanging onto the Number 5 spot like barnacles on an old boot, while Brain Training for the DS jumps two places from Number 8 to Number 6. Mario Strikers Charged Football doesn't do quite as well, with the weird Wii pig bladder hoofer slipping three places to Number 9.

Take-2's movie tie-in, Fantastic Four: Rise of the Silver Surfer, is the only new release to ride into the Top 40 this week. It lands at Number 8 on every platform you could stretch your manhood around, just behind Activision's other Marvel-ous title, Spider-Man 3.

The only other new additions to the chart are EA's Medal of Honour: Vanguard and Black Bean's The History Channel: Great Battles of Rome. The former shoots its way back into the All Formats Top 40 on the PS2 and Wii at Number 18, while the latter wages toga-clad war at Number 34.