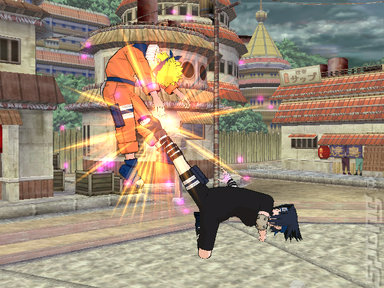 All Images (6) »
U.S.-based D3 Publisher, has just released this batch of new screens from its forthcoming Naruto: Clash of Ninja Revolution, based on the hugely popular animated series from Japan.

The TV series is becoming increasingly popular in the US and Europe, following repeated airings on Cartoon Network, which can only mean that interest in the cutesy cel-shaded videogame spin-off(s) is also set to increase.

Naruto: Clash of Ninja Revolution will include characters that have never been featured in the Clash of Ninja game series and is set to follow the storyline of the TV series. Most excitingly it will take advantage of the Wii Remote ?in fast-paced ninja action for up to four players in nine different gameplay modes.?

D3 Publisher is still to announce a European and UK release date for the game, while Atari has recently released a Naruto: Ultimate Ninja 2 title for PS2 and Ubisoft is also set to release Naruto: Rise of a Ninja on Xbox 360 later this year.