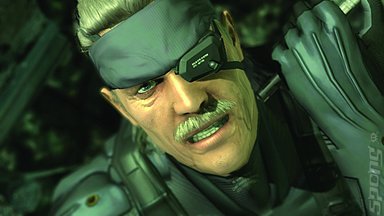 "Someone get this thing off my eye!"
All Images (4) »
Rumours are flying around the gaming community that Konami is breaking its Metal Gear Solid 4 PS3 exclusive and bringing it to the 360. SPOnG has taken the time to dig a little deeper and found that this is far from fact.

XboxLiveAddicts reports that, ?It's been confirmed that it will hit the 360 also in 2008.? The site goes on to claim that the release will feature content that's exclusive to the 360 a la GTA IV and should be out around November of next year.

SPOnG can tell you, however, that Konami has confirmed nothing of the sort - it's all still very much in the realm of speculation. We spoke to a representative of the company, who told us simply, ?We don't comment on speculation.? Does that mean that MGS 4 definitely won't come to the 360? No. But it does mean that Konami has consigned any 'confirmation' to pure rumour.

SPOnG queried the 'fact' that Konami is in talks with Nintendo to bring MGS to the Wii, and we were once again met with, ?We don't comment on speculation.? Okay, so this is what's called in the trade, a "non-denial, denial (NDD)". It's the kind of phrase that is used to maintain interest in the public and to ensure that stock markets are not thrown into chaos leading to the end of global capitalism.

Of course, we exaggerate (it's Monday, we're allowed)... however, while a NDD is certainly not a confirmation of a project going ahead, it is massively annoying for all concerned. Just for once, a "Nope, we're entirely aware of the story to which you refer, and it's total nonsense," would be good.

A grand prize will be awarded at the end of the year.

It used to be all you needed to get an exclusive was enough beer and a loose-lipped employee. Now you also need confirmation in the form of a press release. It's no fun any more.

Sniper 4 Jun 2007 16:10
4/10
They got their source from a xbox1.5 forum where a kid used an old article for MSG2 and just replace the names with PS2, PS3, Gamecube, Wii, xbox, xbox1.5. Its been going to website to website. Now some other sites are adding their own say to it then another website sees that and NOW IT MAKES IT CONFIRMED.

me 4 Jun 2007 16:45
5/10
All of you xbox , nintendo and playstaion fanboys have to realize that its not the end of the world if a game jumps platform. You guys defend you system like its your god. Relax. Every system has the ups and downs. You guys fight about it like your on their payroll. The dont give a hoot about you , they only care about your money. What everyone needs to understand it would be awsome if a game jumps platform! because now sony is going to try harder to make a game better than mgs4. Same with all the rumours to gears of war going to the ps3. In the real world compitition is what makes great software. Do you think video game systems would of advanced as nuch as it did if nintendo had no compitition . Hell no.. Thats all i have to say im sure this will cause many rants but time to suck it up . By the way I have all three system from day one so i know whay im talking about

Joji 4 Jun 2007 17:32
7/10
Exclusivity is a very jaded set up for games, as usually such actions get reversed eventually. Super Monkey Ball, Tomb Raider, Colin Mcrae etc. MGS would be welcome on my 360.

Best way is to just buy all systems. Then you don't care what's on them.

satyanasi420 13 Jun 2007 10:59
8/10
this is total bs
this game has been in production for 5 year al ready and for the ps3.
sony has had a full contract with Konami and kojima since MGS2.
how many times in the past has so,me random 360 fan boy who does't have a life posted some thing similar online.
wat is the the 4th or 5th time.
oh and this add is kinda untrue to.
Rock star games has confirmed exclusive content fot the ps3 on GTA IV not 360

satyanasi420 13 Jun 2007 10:59
9/10
this is total bs
this game has been in production for 5 year al ready and for the ps3.
sony has had a full contract with Konami and kojima since MGS2.
how many times in the past has so,me random 360 fan boy who does't have a life posted some thing similar online.
wat is the the 4th or 5th time.
oh and this add is kinda untrue to.
Rock star games has confirmed exclusive content fot the ps3 on GTA IV not 360

hollywooda 13 Jun 2007 11:06
10/10
Posting things twice doesnt make you anymore right....this is a comments from Rockstar to 1up. When asked about the possibility of PS3 receiving its own exclusive GTA 4 content, Rockstar told us: "We don't comment on rumor or speculation." Where as for the 360 it's all confirmed & probably all being worked on.

& when MGS comes to the 360, i'll accept your apology......
Posting of new comments is now locked for this page.