Down in Shoreditch SPOnG's Steve Boxer dives for news and gets his hands on some games that had demonstrably come on since GDC, for our edification. 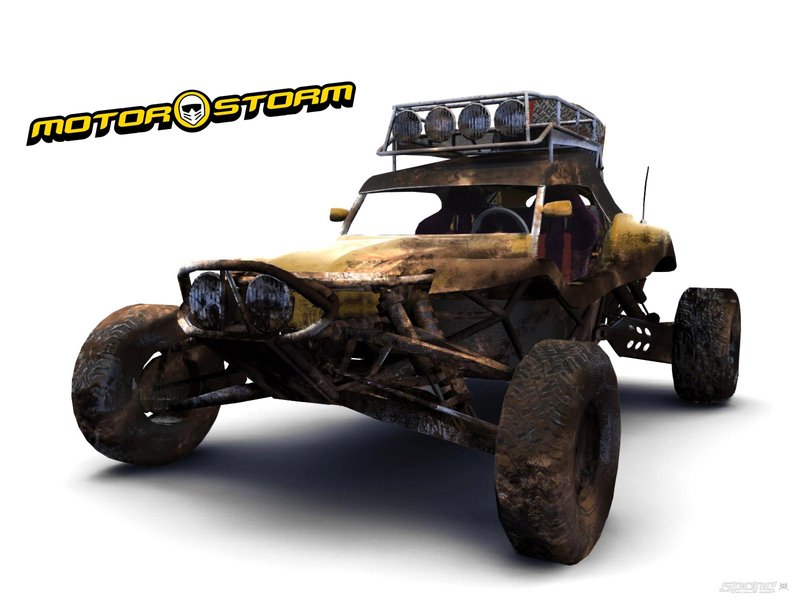 Sony?s senior producer Pete Smith fleshed out the the new MotorStorm driving mode: Time Attack, telling SPOnG, ?This is more than a simple time trial. You?ll be able to record your best lap for each circuit, and we have global leaderboards and about the top 250 cars will be stored, so you can race against the best in the world. You?ll be able to download up to eight ghost cars for a race.? You won?t have to pay, thankfully, for Time Attack, and it will appear on 25 May.

UPDATE: Sony has informed us today (May 18th) that there is in fact no fixed date for the release of the new track. Therefore, although our mention of June 1st comes from the presentation, the official line is that Sony is not putting a firm release date on the track.

Then on June 1, Sony will put Premium Content Pack One on the PSN, whose main feature will be a new track called Coyote Revenge. Smith said: ?This is based on a reversed Coyote Rage, although there is so much that?s new about it that you won?t recognise it.? Pack One will also include three new Tickets, including Coyote Weekend, which will yield an unlockable car (alas, what class it belongs in has not yet been revealed). Plus, there will be a new online mode called Eliminator, in which: ?You?ll have 20 seconds to catch and overtake the person in front of you?. And the pack will include a new Big Rig and a new Rally Car. When we find out how much this Pack One will cost, we?ll let you know; in the meantime, it?s good to hear that MotorStorm continues to evolve online.

PS3's New Game
Snakeball, another PS3 game downloadable from the PlayStation Network (to whose existence we recently alerted you) also made its first public appearance. In principle, it?s pretty much a more sophisticated take on the old Nokia classic Snake ? you navigate a clever virtual disco floor (whose lights denote potential hazards and generally give subtle hints as to what you?re supposed to do) generating a tail of balls which, usually, you must deposit in a goal. Crash into a competitor and whichever one of you has the shortest tail will lose out; you get extra bonuses for depositing large numbers of balls in the goal at a time.

Snakeball has three game modes ? challenge (which is the main mode), arcade shooting (where goals are defended by mines which you must shoot) and a timed Frenzy mode. It is one of the few PS3 games to make use of the Sixaxis ? with which you can steer, leaving the buttons free for shooting and generally expending power-ups. It supports up to four people playing split-screen, and generally looks like a fairly diverting addition to the PlayStation Network canon.

WarHawk! What Is It Good For?
WarHawk was also prominent at the event and, happily, it had clearly progressed considerably since GDC, achieving a hitherto unseen level of polish. Incognito?s Dylan Jobe got quite down and dirty with the game, demoing how best to play it and picking out some of its features.

He started off with the customisation, which lets you fiddle around with your character and, for example, design colour schemes and insignias which will instantly be applied to any planes you climb into; you can design AI enemy planes, too, making them easier to distinguish.

He then went through the online features ? a community page, for example, will be packed with stats, detailing things like your number of kills, death ratios and the number of people you have run over while driving jeeps; there will also be a buddy list, which will let you spectate on friends? games. As you improve in the game, your rank will be upped ? the ultimate one being General, High Command ? and you?ll also be awarded wings and medals for specific in-game achievements, such as getting a certain number of kills. You?ll be able to set up servers which dictate a maximum rank among the participants, which will be good for newbs.

Jobe revealed that there will be 25 battlefields across five worlds at launch, which is quite impressive given the huge maps. Game-play-wise, one of the key things to do is to level up your bases (by standing next to their flags without getting killed) ? once you?ve claimed a base, you?re then able to jump into its turrets and so on, and if you level up two nearby bases, you?ll get extra weapons, power-ups and so on, and begin to establish a part of the map that?s pretty much owned by your team.

The planes have chaff to throw incoming missiles off your scent, but you get kudos for pulling off outrageous aerobatic stunts when pursued by missiles. Proximity-based air-mines looked like pretty cool weapons ? Jobe said it?s a good idea to drop them near aerial health pick-ups ? and in a plane, you can make use of a stealth pick-up which renders you invisible (although only if use the machine-gun, not the missiles). Jobe says WarHawk is now looking at an: ?End of summer/early fall? release, and it will definitely come out as a download at first, although possibly on disk at a later date.

LittleBigNews
Naturally, LittleBigPlanet featured prominently at the Sony event although, disappointingly, it was clearly the same code (and same levels) as shown at GDC. However, we did manage to get hands-on experience, so can discuss the control system to an extent. Which seemed utterly exemplary ? the square button brings up what Media Molecule call your Pop-It ? the drop-down menu which lets you customise your character, select objects for level-building, affix stickers and so on. R1 lets you grab objects, X is jump and R2 and L2, in conjunction with the left and right sticks, lets you wave your arms around. Let?s hope, for Sony?s sake, that LBP does manage to surface in time for Christmas.

SingStar Outloud
Finally, we got a good look at the next first-party PS3 game due out ? SingStar. Which delivered few surprises. Apparently there will be 350 songs available for download at launch (Sony would not be drawn on pricing), and downloads will, in general be about 55Mb, as they include videos ? but, happily, you can set them going in the background while you play on. SingStar will major on MySpace-style community stuff, including an area called SingStar Scene, in which you?ll be able to meet people and a Community Gallery containing the highest-rated videos and recordings. If you team the game up with an Eye Toy, it will automatically video you and take a load of stills when you hit a song?s chorus; you can manually tell it to video you if you feel you?re on form, too.