Or as solitary as multi-player Solitaire can get 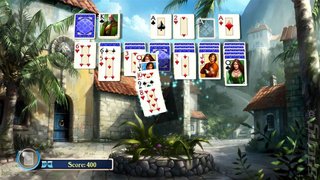 So, what makes it any different from playing with an old-fashioned deck of cards? You can play around the world, apparently. Voyage Adventure mode challenges players to travel around a map completing solitaire games to unlock custom card designs.

Also featured are two different multiplayer modes. Microsoft tells us, ?In two-player mode, two games take place at the same time, and both players share the same foundation piles, prompting a fight over the piles in the race to win the game.? You can play nice, however, in co-op mode, where ?players work together to attempt to finish the game with the best score possible, and players also have the ability to pass cards to each other.?

We can't help but suspect that Silver Creek has missed the point of Solitaire.

Soltrio Solitaire will set you back 800 Microsoft Points. It comes with the usual 12 Achievements and 200 Gamerscore points.
Companies: Microsoft