SPOnG pays our respects to the father of PlayStation 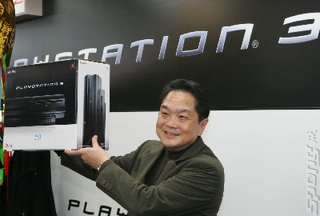 ?Mr Kutaragi will pass on the torch to the next generation, stepping back from his executive management responsibility of the company to serve as Honorary Chairman of SCEI. With his deep and instinctive insight into future technology, Mr. Kutaragi will also continue to support Sir Howard Stringer, Chairman and CEO, Sony Corporation, as senior technology advisor?, Sony?s press release informs us.

Just take a second to re-read and digest those astounding figures. SPOnG salutes Mr. Kutaragi and wishes him well in his retirement. It?s only a few years ago that we remember drunkenly dancing next to him at the PlayStation 2 launch party.

This is how we want to remember Ken, with a massive ear-to-ear grin rightfully celebrating the unparalleled commercial success stemming from his original vision. We cannot, somehow, imagine doing the same dance with Kaz Hirai in five or ten years time.

Here?s Ken, in his own words:

?I am happy to graduate from Sony Computer Entertainment after introducing four platforms to the PlayStation family? It has been an exciting experience to change the world of computer entertainment by marrying cutting edge technologies with creative minds from all over the world. I?m looking forward to building on this vision in my next endeavours.?

Sony?s Chairman and CEO, Howard Stringer, added, ?Ken Kutaragi is a rare combination of a powerful visionary and entrepreneur in one figure. Not only has he created a multi-billion dollar business for the Sony Group, he has brought the industry into a new dimension. Sony has benefited tremendously from his vision, his creative genius, and from the very strong team he assembled and nurtured. As Ken moves forward to pursue new opportunities, we will encourage and support him.?

Almost as a ?don?t forget the new boy? add-on, Stringer also adds, ?My support also goes to Kazuo Hirai, who is a terrific executive with a proven track record with PlayStation business in the US. I am confident that he will inspire and lead SCEI to new heights.?

Let us know your thoughts, as ever, in the Forum.

RiseFromYourGrave 26 Apr 2007 21:25
1/5
"Kutaragi" wrote:
"It has been an exciting experience to change the world of computer entertainment by marrying cutting edge technologies with creative minds from all over the world. I?m looking forward to building on this vision in my next endeavours.?

hes going to be doing something console-related maybe, outside of sony? interessante!

RiseFromYourGrave 28 Apr 2007 17:55
4/5
i read that satoru iwata would love to work with kutaragi, he said so at a conference that a japanese newspaper covered

if kenners can buck his honourary sony position, who knows what might happen!

minty 29 Apr 2007 07:06
5/5
poor ken - all his crazy talk got him squeezed out till he has no choice but to quit. you never see a japanese company sack an employee theyre always forced to resign
Posting of new comments is now locked for this page.