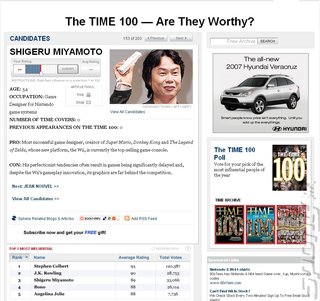 Miyamoto's Time 100 listing
Nintendo guru Shigeru Miyamoto is the second most influential person in the world, according to the current polling figures for the Time 100. That's more influential than the president of the United States, according to voters.

Miyamoto joins 201 other nominees up for making Time's prestigious list. He currently ranks behind only the American satirist Stephen Colbert. That's 199 other nominees trailing behind him, including George Bush (Number 15), Bill Gates (Number 23), Ricky Gervais (Number 56) and, languishing at the bottom, Paris Hilton.

According to Miyamoto's listing, his pros are, ?Most successful game designer, creator of Super Mario, Donkey Kong and The Legend of Zelda, whose new platform, the Wii, is currently the top-selling game console.?

Cons for Miyamoto are listed as, ?His perfectionist tendencies often result in games being significantly delayed and, despite the Wii's game play innovation, its graphics are far behind the competition.?

Should Miyamoto make the final 100 (which looks pretty likely at this point) it will join being knighted in France on his list of non-games industry honours.

Miyamoto wouldn't be the first to make the list, with former Sony Computer Entertainment president Ken Kutaragi making the list in 2004 and Bungie's Halo 2 team appearing in 2005.

Deffantly very influential! If it wasn't for him I wouldn't had got into gaming!

ionysus 24 Apr 2007 16:07
2/10
Yeah, same here. The first console I ever owned was an NES. Ahh the good old days, when consoles came with 2 games (Mario/Duckhunt), 2 controllers, and a light gun. Since then I always feel like I'm getting screwed when buying a console, when are you ever going to buy a console and not want a 2nd controller and a game to start you off so you can play with your friends right away?
more comments below our sponsor's message

actually mario 64 was not packed in with the n64. the gcn and n64 came without games.

oh...i would say that miyamoto is pretty damn influential. he and nintendo turned the electronics and gaming industry around in the early 80's (which was about to totally implode upon itself) and look at where we are now. gaming is quickly reaching the sales numbers associated with hollywood....all because of a little dude named jump man.

Oh do stop it now Tyrion. A demo disc??? A demo disc is a marketing campaign, for f**k's sake. You can't possibly compare chucking in for free one of a system's best first-party titles with what's essentially a glorified advert...

tyrion 25 Apr 2007 12:53
10/10
Jay wrote:
Oh do stop it now Tyrion. A demo disc??? A demo disc is a marketing campaign, for f**k's sake. You can't possibly compare chucking in for free one of a system's best first-party titles with what's essentially a glorified advert...
And which makes more sense from the perspective of getting people to buy games and enjoy themselves? Advertising games they can buy, or giving them the only game they will need for the next four months?

Let's face it, these companies don't give the games away out of the good of their hearts, do they? They give them away in order to promote the platform and get people to buy more games.