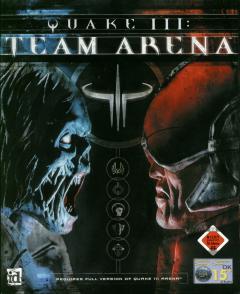 All Images (4) »
America's Entertainment Software Ratings Board (ESRB) has inadvertently revealed that Quake III: Team Arena is on its way to the Xbox 360. A listing on its website shows that the game has been submitted for rating (and earned itself a 'Mature' rating, if you were wondering).

The ESRB listing shows the publisher for the game as Pi Studios rather than Activision, which publishes the PC version of the game as well as the Quake franchise's most recent outings.

Pi is a self-proclaimed "independent game developer based in Houston, Texas", and is responsible for Halo 2 on the Vista platform, Mercenaries 2 for PlayStation 2, and Call of Duty 2 - Big Red One for the 360.

We can only assume that either ESRB has got it wrong or, that with Pi slated as the publisher, the 360 version will be an Xbox Live title. Let's fact it, an independent developer is unlikely to branch into retail distribution on a monster property such as Quake. The fact that Team Arena was an expansion pack on the PC also suggests that there won't be enough content for a retail release on 360.

SPOnG contacted id Software, owners of the Quake franchise, for more information. No comment was available at the time of press, however.

In its PC outing, Team Arena offered up a bevy of new weapons and team-based multiplayer modes. This won't be the first time Quake 3 has made it to a console, with appearances on the Dreamcast in 2000 and Quake III: Revolution appearing on the PS2 back in 2001.
Companies: Activision Pi Studios id Software
Games: Quake III Arena Quake III: Team Arena

offers. i recommend the SPAMSPAM because its free. Then put 10 films on your list.

It was to hearty laugh.
Any chance of an IP ban on this sucker?