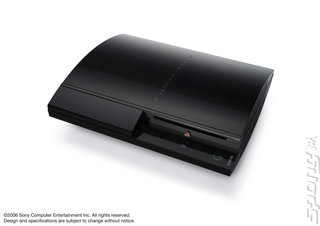 The PS3 has notched up an impressive 600,000 sales in Europe, according to Sony. It estimates that around ?400m (Ł271m) of PS3 merchandise, including hardware, software and peripherals, has already been sold.

That figure means a not-to-be-sniffed-at 60% of the 1 million PS3s shipped has been sold. Impressive figures, SPOnG's sure you agree, whatever your fanboy credentials may be.

Sony has also outdone the PS2, which took several weeks to reach similar figures in 2000.

These figures come following Sony's announcement on Monday that the PS3 sold 165,000 units in the UK over its launch weekend. The Financial Times is actually reporting a larger figure of 173,000, but when SPOnG contacted Sony we were told, ?The official figure for the UK is 165,000.?

The comeback to the PS3's successful European launch from Sony critics has been cries of ?if the [insert console of choice] had shipped that many it would have sold that well too!? Maybe, but the fact of the matter is Sony did put that many consoles into stores and now it's reaping the benefits.

A bigger issue for Sony is whether the success can be maintained. ?I would expect the PlayStation 3 to do well initially because a lot of PS2 users had been waiting for the PS3 to come along,?? said Paul O?Donovan, an analyst from Gartner. It remains to be seen, however, whether Sony can keep its sales momentum once its loyal fan base has been saturated.

Maybe, but the fact of the matter is Sony did put that many consoles into stores and now it's reaping the benefits

true,but realesed about a year and a half after what they would see to be the closest competitor(360) it really isnt good enough.i think there is about 10million 360s out there.it certianly will be in up hill stuggle and altho MGS4 is on the horizon,is it enuf?will the other "killer apps" be enuf?and what about the wii?........tune in this time next week folks.

ozfunghi 29 Mar 2007 11:16
3/12
The comeback to the PS3's successful European launch from Sony critics has been cries of ?if the [insert console of choice] had shipped that many it would have sold that well too!?

No offense to sony or their great launch, but it is simply common sense, borderline fact, that if Nintendo put out that many consoles, they would have sold the same, or probably better. 4 months, and the thing is still not even hitting shelves, but has preorder lists well over 10 people per store. 6 million sold already, let's not forget that.

Anyway, good for Sony. Just don't insinuate that people that claim what you say, are "Sony critics" (read Nintendo/MS fanboys). It's just pretty much common sense. The main thing is, 6 million shipped and Wii is still selling out. 4 million shipped for PS3 and not selling out by a long shot. We'll see how things go from here. At least it's going to be more interesting than PS2/GCN/XBOX. Yay!

Joji 29 Mar 2007 12:28
4/12
I agree its gonna be interesting, but asking if the PS3 run will ask is a very valid question. With Sony already admiting 360 has the 'hardcore market', the same sort Sony want to a degree, its really up hill for Sony this time.

When I also see DMC etc going on 360, the high cost of PS3 development I think is also playing a hand in 360 and Wii's favour. Maybe that's also why Bandai Namco have recently moved Ace Combat, Katamari etc to 360 and Wii.

PS3 is gonna have a battle because a lot of casual gamers are now entering the market because of Wii and DS. It wouldn't surprise me if PS3 went the way of PSP this time round. Good potential but too expensive to buy and develop for, and too late to the party.

merciless_james 29 Mar 2007 13:17
7/12
Its actually 0.99%, but I agree, its hardly a massive number, theres none going on ebay for more than the asking price (not surprising when you can walk into any shop and buy one), so looks like the scalpers have got burned this time :-)

apart from those who want one and cant afford it.

apart from those who want one and cant afford it.

Okay, maybe I didn't phrase that as well as I intended to, I meant to say people who wanted a PS3 and can afford to plonk down Ł425 for it during the launch period have got one.

For those people who want one and can't afford it the best option is to wait for the price to drop, okay that may take a while, but those graphics are still going to be just a pretty in a year or so than they are today or alternatively you could import a console if you have the right components (PS3s are cheaper in Japan and America), plus there's always ebay.

No console is worth buying at launch, for one thing the price is at it's height and there is a lack of decent games, I mean why not wait a few years and wait for the major titles to come out, by which time the price may have dropped, in the mean time there are two cheaper consoles on the market, and besides it will take a few years for the PS3 to reach it?s graphical potential anyway.

As I said before I can?t really see the 600,000 figure increasing anytime soon, not unless there?s a price cut, Ł425 is out of reach for a lot of gamers, only the most hardcore gamer will pay that much for one.

Earl 29 Mar 2007 17:34
11/12
I do find these figures that are been spouted about sale rather "Interesting" as no one sold out, pre orders were been cancelled at most places I have heard of one retailer buying 30 to only sell 8 on launch weekend.

i have 3 regular custys who have got PS3's which compaired to the Lack of 360's at launch, most of the regulars had a 360 at lanch weekend, also adds to my suspisions.

I would like to see the "in the customers hands" figurs and not the total number of boxes shifted via trade sales, which to be honest is not a figure that is easy to get, unless Centersoft (official Sony distributor in the UK) contacted every customer and requested there sales figure on PS3 last weekend.

Sales momentum is carried by game releases and as most of the PS3's titles have already been out for a while on 360 this could be there biggest problem to deal with.

tyrion 29 Mar 2007 18:24
12/12
Earl wrote:
I would like to see the "in the customers hands" figurs and not the total number of boxes shifted via trade sales
What you want is what everybody is already talking about; the ChartTrack figure of 165,000 in the UK.

As you can see on their methodology page, ChartTrack base their figures on the over the counter sales reported from the retailers' own stock and sales systems. They don't get all the reports, obviously, but they continually keep an eye on the percentage they do get and mark up their figures accordingly.

NPD in the US and Media-Create in Japan work in exactly the same way.
Posting of new comments is now locked for this page.