PS3 Launch: The Morning After

HMV and GAME both buoyant after early morning launches 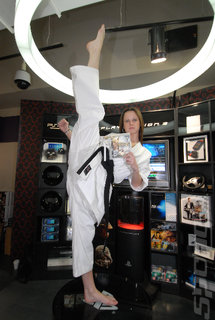 All Images (9) »
Not to be outdone by the PS3's official midnight launch at Virgin last night, Oxford Street's two other major game retailers, HMV and GAME, both hosted early morning launch events of their own this morning (pictured right and below).

Over a hundred people turned up at HMV to pick up a PS3 with a free copy of the sublime Virtua Tennis 3 from Sega.

Chloe Brand , a martial arts expert, was also on hand to give real life Virtua Fighter 5 style demos! A strange sight indeed at 7am on a 'dreichy' spring morning in central London.

"One guy had even turned up at midnight last night to be the first in the queue!" Simon Winter, PR manager for HMV just told SPOnG. Perhaps nobody had told the poor fellow that if he had walked five minutes up the road to Virgin he would have nabbed himself at free Ł2,000 telly.

"I think the word of mouth momentum is going to build and build and build... once people start playing PS3 at their friends house they are going to want one," Simon opined.

"One other great thing for us is that Blu-ray is going to grow exponentially as the sales demand grows. After showing off the quality of the games to your mates, you want to pop in a high-def movie and a lot of the Sony titles are action movies that are perfect to the mainly male audience."

"I have to say that the females were notable this morning by their absence," he added.

Down the road at GAME the mood was equally buoyant early this morning. Anna Macario, GAME?s Marketing Director, told SPOnG earlier that, ?We?ve been really pleased with our Sony PlayStation 3 launch here at GAME. Across the UK we?ve had a really good response - our customers are extremely excited about this next generation console. We?ve had a great turnout at our midnight and breakfast launches around the country and we have seen very strong demand in the past 12 hours and we anticipate this to continue throughout the weekend.?

What has your experience of the PS3 Europe Launch been? Tell us in the Forum below
Companies: SCEE
Games: Virtua Fighter 5 Virtua Tennis 3

Sorry but somebody had to say something...