SPOnG's gaming hands-on at the heart of the beast.... 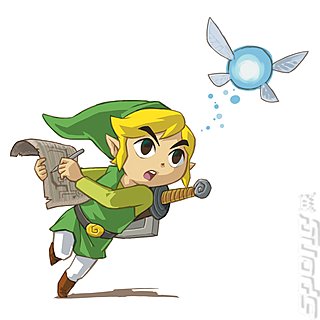 While GDC, despite what some people are claiming, is no E3, there are still plenty of games and gaming accessories to mess around with. In between hob-nobbing with industry bigwigs SPOnG managed to get its paws on some of them. Here's what our man on the ground thought.

The Legend of Zelda: Phantom Hourglass
?Really? You got to play Phantom Hour Glass? Was it hard to conceal your *ahem* excitement?? you cry! Well, kind of, and YES! While, technically speaking, I played Phantom Hourglass, the only part of the game accessible was a multiplayer mini-game. But, like all great things from Nintendo, it was simple and a helluva lot of fun.

The basic set-up is that one player out of a possible four is Link, while the remaining players take on the form of armour-clad nights that you may recognize from Wind Waker and Minish Cap. The whole thing happens in a maze and is very much like 'capture the flag', but with 2D gameplay stylings. Link is controlled by leading him around with the stylus tip, a la Animal Crossing: Wild World, while the knights feel kind of like wind-up toys.

Draw a line on the map for them to follow and off they go, stopping at the end and awaiting further command. The reason for the difference in control and the real crux of the game is that as Link you can't see where your enemies are on the map but you can react in real time. Your stalker, however, always knows where you are and can change course quickly to catch you if you don't cross paths. This clever cat-and-mouse gameplay goes on until Link manages to find all the little Triforce-type pieces scattered throughout the level and return them to his 'base'.

While it initially took a few moments to really get a good strategy down, I enjoyed the hell out of this game. Despite being disappointed that I couldn't try out the actual game itself, my sadness quickly subsided as I realized that if the mini-games are this good, this game is going to be phenomenal.

flOw
GDC's PlayStation booth had a few of Sony's key titles on display around its border, but none was more prominently displayed than its download services killer-app flOw. Sat up on a huge plasma panel, dead-centre in the booth with a rather comfy couch, flOw was , sadly, set up as the highlight of the booth.

This was a poor choice, in my humble opinion. While the game is indeed fun to play with its simple controls and simple yet very pleasing graphics, it is by no means a service-pushing joy like Geometry Wars.

While most of you have probably played the flash-based demo that's been available online for some time, the game does have a different and better feel on the Sixaxis. Otherwise, however, it's pretty much the same. I didn't get to spend a great deal of time on it, but I couldn't help but think "this is it?" the whole time I played. Hopefully, for Sony's sake, David Jaffe's Calling All Cars will be more of a stunner when it's released because, for my money, flOw is a no-go. Perhaps the more casual gamers will enjoy the simple tilt-control gameplay, but at this point I don't imagine many casual gamers have a PS3. Time will tell, though.

MotorStorm
Despite MotorStorm's recent US release, GDC was the first time this writer has had a chance to go hands-on with the game since it was originally shown at E3 almost a year ago.

The game is a stunner and a real point of pride for any PS3 owner. Just like Fight Night was for the 360, this is the first title that will be used to show off your shiny new wallet-emptying purchase to your friends. Aside from just looking nice, however, the graphics do indeed make the game that much more enjoyable. First person mode in racing games is generally the most visceral and maddeningly hard mode to play in, but no game before can compare to the 'Whoa sh*t that tire almost killed me!!' feel you get in the cockpit in MotorStorm. For all I know the gameplay could be terribly average and derivative, but from the few minutes I was careening around muddy cliffs, I was completely stunned.

Next up was a showing of Mistwalker's two big JRPGs (Japanese Role Playing Games): Blue Dragon and Lost Odyssey. The showing was actually presented by the legendary Mistwalker main man and Final Fantasy creator, Hironobu Sakaguchi, himself.

For those of you who have been interested and following Blue Dragon, very little new was shown other than some English text and voice-overs. As a fan of many things from Japan I can set your mind at ease when I say, without question, that Mistwalker has done an admirable job when selecting the English voices for the characters. For those who haven't paid Blue Dragon any mind, dismissing it as a standard JRPG, wake up to yourself!

While the combat is turn-based, an aspect off-putting to many, there's a (very Final Fantasy XII) real-time world map where you can decide to engage or avoid enemies instead of the oft-maligned random battles usually associated with them. Beyond that, there are actually ways to combat the enemies on the world map in places where the enemies are visible. This allows you to either avoid them or use certain special abilities exclusive to segment them. A spell that enables your character to auto-defeat types of enemies you have encountered previously, which has to be earned, enables you to avoid a lot of the grinding that is generally associated with these types of games. Another feature shown was a stun grenade-type device that enables you to either stun an enemy long enough to avoid it or sneak up behind it, giving you an edge once you switch into combat mode. Yes, as I said, very Final Fantasy XII.

The real surprise, however, was some real-time rendered footage of a cut scene from the forthcoming Lost Odyssey. While little of the actual game play could be seen, I was told that it is intended for worldwide release and isn't supposed to be a standard JRPG. The scene I witnessed depicted what I can only assume to be the main character and a female companion, both waiting for a third party member to arrive. As the female team-mate begins to become annoyed at his tardiness, this third character comes staggering onto screen, three or more sheets to the wind, with three lovely bimbos all over him. I won't try do the dialogue justice, but his talk of living it up before going on a "life threatening? adventure, all the while slurring flirtatious words at your female companion, was indeed very comical. Sakaguchi was quick to point out that the game is very serious, but that he felt this was a good scene to illustrate the graphics and storytelling.

He also said that the game is due for a simultaneous US/Japanese/EU release and that the dialogue will be in English with the appropriate subtitles for each territory. His intent is to have the game feel somewhat like an American blockbuster film. Historically they do very well in Japan and usually are presented with subtitles rather than dubbing.

More real-time battles should also help to entice American and European audiences who are generally put off by the standard 'fem-looking boys rising up and saving the world' plot that is so often associated with Japanese RPGs.

Blue Dragon should be released in the US around August of this year while, as SPOnG reported last week, the game will hit Europe in September. Lost Odyssey should be making its way to all territories in time for the holidays (Trans: Christmas). Both games should feature more than 40 hours of game play and, if nothing else, help to bolster Microsoft's still struggling 360 in the land of the rising Wii.

Mass Effect
My brief look at Mass Effect left me a bit uneasy. Originally I had little interest in the title as Jade Empire, Bioware's previous offering, was not my sort of game. When I was shown some combat footage late last year, however, I became much more interested after seeing what appeared to be a good action game with very deep RPG elements. A dream come true for me, truth be told.

What I was shown, however, did little to illustrate the supposedly exciting combat. It instead attempted to highlight the ?innovative? branching stories and characters. As much as the multiple endings and varied paths seem to be a good thing, there were a great deal of graphical issues remaining that still mar the game even at this late stage: texture-popping when the scenes should 'seamlessly' change; jumpy lighting and textures and the occasional blinking polygon reacting weirdly to the lighting were all present. Worst of all, or most glaring to me at least, was the fact that so many of the characters appeared to have lazy eyes.

Admittedly the game still has a fair amount of time before release, but a lot of these things have been present since the beginning, however, so it's worrisome to think they may make it to the final copy. Don't get me wrong, the game looks gorgeous overall, but the few little oddities and glitches just stand out that much more against such a polished world. Here's hoping they tighten it up enough in time for release.

As for the dialogue and branching stories; the developers were only able to promise "more than one ending," but gave the impression that there would be several. The demonstration I was given involved a loony scientist flipping out due to the reanimation by strange alien invaders of his recently deceased colleagues. In one scenario our hero dealt calmly with the workmate, and managed to keep the situation in hand diplomatically. In the second run-through, however, he decided to show off the strength of his pimp hand, and then smooth things over with the now-unconscious doc's other surviving colleague.

While all this may seem like a rather superficial change to the story, the idea is that you are the sole human in a multi-racial police unit and are there as a kind of representative of your race as a whole on the galactic stage. Play kind and compassionate, and other races will assume that's indicative of all humans; lay the smack down on any and everyone you meet, and soon those around you will assume your people to be violent tyrants.

As to which yields the better ending, I can't really say ?it?s subjective. The ability to affect your surroundings in such a deep and meaningful way is intriguing, however, and should lead to some very unique experiences.

ajmetz 13 Mar 2007 00:48
1/1
"The basic set-up is that one player out of a possible four is Link, while the remaining players take on the form of armour-clad nights that you may recognize from Wind Waker and Minish Cap. The whole thing happens in a maze and is very much like 'capture the flag', but with 2D gameplay stylings. Link is controlled by leading him around with the stylus tip, a la Animal Crossing: Wild World, while the knights feel kind of like wind-up toys."

Yeah, we filmed that playtest, as well as the one player demo also, for our DVD production.
A rough edit has been online for internal feedback for a month or two:
http://www.unitedgames.co.uk/files/ds-chart.wmv
Will likely make some changes to the voiceover before release.