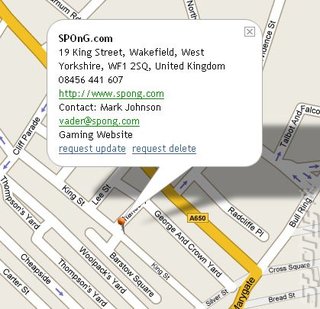 All Images (2) »
Dave Perry, Messiah creator and chief creative officer for Acclaim, has unveiled a map of the games industry. The wiki-style map invites the industry to put itself on it ? literally ? to build a comprehensive guide to the gaming geography.

The map will include studios, publishers, outsourcing companies, colleges, freelancers and the press. Perry's team has already put in around 1,000 ?pins?, and the site's now open for contributions from the gaming community.

The project's being funded by Perry and not-for-profit. In fact, he's rejecting any form of advertising and won't even take your cash as a donation.

It's all go for community-oriented gamers with a bit of get-up-and-go at the moment. Microsoft just announced its XNA development competition for bedroom programmers. On top of that Perry himself's involved in a new Acclaim project that will allow gamers to contribute to the development of its upcoming game Top Secret. He's a bit keen on the whole community thing, it seems. Perry commented:

"This site picks up on two fast-growing trends ? community and user generated content ? the videogame industry is still relatively young and we already have a great community spirit which we hope to nurture for the benefit of industry as a whole. Plus we get to show the rest of the world just how widespread we are, employing creative talent all over the planet.?

"The result is that it immediately becomes the most accurate information available in the world, it will grow daily, and it?s shared to all. We expect to see everyone using it, job hunters, press, gamers, college students, investors, even agencies that would like to see just how prolific this industry is."

What a nice chap. SPOnG's already put itself on the map. If you want to see more, click here.