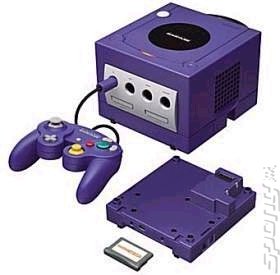 Farewell, we loved you... some of us.
In a recent interview?, Perrin Kaplan (Vice President, Marketing & Corporate Affairs, Nintendo of America) talked around the subject of DVD for Wii and the competition; she finally admitted what all Nintendo fanboys know; and finally confirmed long-awaited death of the GameCube,

The passing of the unit was probably carried out in front of a thousand respectful Wii engineers in Kyoto but was confirmed by Kaplan?s simple statement: ?Are we producing any more GameCubes? No?.

OK, so the bulk of the interview concerned the Wii. And one major point that arose was the fact that aside from, ?the Pokemon?? game that has launched in Japan, and it definitely will come here? there was still no solid date for worldwide online Wii?ing.

It appears, however, that Ms Kaplan is growing a little tired of the hardcore gamer?s constant demands for more from the Wii, saying ,??for people who are hardcore gamers nothing can ever come fast enough for them, ever. I mean even when we announced a mass market price? hardcore gamers even complained about that.?

She qualified this with a kinda-sorta complement before getting back on message with the mass-consumer appeal of the Wii ? and the fact that additions have to be drip-fed to the non-hardcore, ?And it's just because you (the hardcore) are all very educated about it and have a really huge appetite and want everything now. And having things at that pace is overwhelming for a lot of the other consumers, so we've tried to roll things out at a pace that makes sense... So online stuff will be coming soon and hopefully you all will be really pleased with it. And if you're really, really into online I can bet that you'd be playing it on all the systems.?

Now, what is it that all Nintendo fanboys know? Simple, Nintendo is not a game factory and a hardware innovator, it?s ?an artist?. We know this because Kaplan explained about guidelines for third-party developers, saying: ?We don't give guidelines; that's like one artist telling another what to do. What we do is act as a resource to help them through; if they have ideas, how to implement them, how to better it, things that they can adjust to make it happen. But the creative element... if you talk to different developers, they're so excited because there are things that they can do that they could never do before and that's been happening on the DS as well.?

And who would she say are the other artists? ?I think EA has really embraced the Wii; they're very excited about what can be done with Tiger Woods' golf game. I think people finally really feel unleashed in terms of what they can do, and they can do it for not as much cost-wise. You can create something stupendous and have it be really successful without having put $40 million into it.? Ouch, eh, Sony, Microsoft?

On the subject of the competition, well, Perrin?s got ?empathy? for Sony, but a great line in damning with faint praise for Microsoft as this peach of a quote shows, ?Microsoft is probably the only company that could have survived in this business this long having lost as much money as they did. They're trying to do some creative and innovative things and we give them credit for that.?

As for Wii and DVD? ?We've not yet come out with a firm date; we haven't talked about it too much. It's not the top thing on our list.?

Anybody else noticed how this woman's not your average games company exec? I mean she doesn't really enthuse me the same way some e.g. Reggie does. All she seems to do is appear at shows or interviews and say something wrong or act like an ass. Is it just me?

i'll miss it too. Though it will always live on through the Wii. It brought me back into gaming. I missed the entire PSX/N64/Saturn age (girlfriends, college...).

I'll finish those on my Wii.

finish killer7,its one of the finest games you will ever play.

i borrowed baton kaitos of a friend but my stupid free loader wudnt run it in colour.

OptimusP 22 Feb 2007 14:20
5/11
I think Kaplan has to be really good at the paperwork stuff and all...keep her away from the marketing pleeeaaassseeeeee!!!

Also of note, sure, it's a mass market price (kinda) for LAST generation hardware. It should have been half the price for what it is.

I agree that Perin is somewhat jaded by the industry and feels a tad smug in her position. But she's a nice lady and I can relate to having a gut full of negative rants (however valid they may be :D).

Tim Smith 23 Feb 2007 09:39
8/11
Hypnotoad wrote:
I agree that Perin is somewhat jaded by the industry and feels a tad smug in her position. But she's a nice lady and I can relate to having a gut full of negative rants (however valid they may be :D).

Not from here. When you say, "She's a nice lady", is this from personal experience? And how can you relate to the negative rants?

sneakyduck 23 Feb 2007 11:02
9/11
Tim Smith wrote:
When you say, "She's a nice lady", is this from personal experience?
Oi oi! I thought Nintendo was a family-friendly company but not that friendly...

Tim Smith 23 Feb 2007 12:41
10/11
sneakyduck wrote:
Tim Smith wrote:
When you say, "She's a nice lady", is this from personal experience?
Oi oi! I thought Nintendo was a family-friendly company but not that friendly...

Lawks! I meant had Hypnotoad ever met her?

I dunno... some people can find double-entendres in the most unlikely of passages.

Paarth Gururajan 3 May 2008 12:17
11/11
Gamecube when we first met you were very expensive and I really got upset of not getting you.I first met you when I saw this first game "Luigi's mansion" I was surprised of the fluid animation of the game for not only it's graphics were good but
also it's gameplay.When I got you I bought a big tv since my old tv turned your games black and white.I got at least some of these games which are Luigi's mansion SMS(super mario sunshine) redcard 2003 paper mario the thousand year
door,battalion wars,dk jungle beat,mario kart double dash Sonic 2 battle,rayman arena,Warioworld,super smash bros meele and Warioware inc mega microgames .That's totally 12 games and I'm sure people would have bought more than I have.
All these games were almost great including paper mario which showed me a unique kind of adventure.But dodn't worry cube,when I grow up I'll try to revive you.
Until then may the last units be sold on your grave and may your brothers GBA and NDS live.Good bye Gamecube I'll miss you(Sob Sob)
Your best pal Paarth.
Posting of new comments is now locked for this page.