Kratos due back this March, demo in Feb 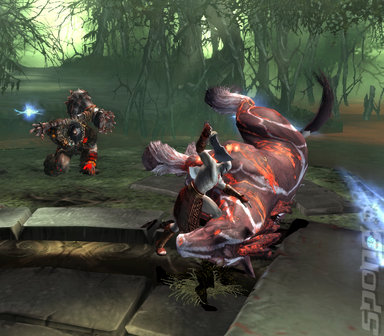 All Images (9) »
It ain?t all about the shiny co-called ?new generation? over here at SPOnG don?t you know. We still have some love left for our battered old PS2s, with many of us still revisiting some of last year?s pleasures such as Shadow of the Colossus and even going back to 2005?s glorious God of War from David Jaffe and his team at Sony?s Santa Monica studio.

So it?s great to hear that the sequel to that last title, God of War II should be out sometime around mid-March, according to the game?s developer at least.

Good news, if you are not yet prepared to shell out Ł425 on a shiny new PS3, but are looking for some good PlayStation lovin? then you need look no further than this.

Santa Monica developer and GoWII game director, Cory Barlog has posted on his blog that "primary work is done" on that game and that it is almost gold.

Barlog?s blog entry reads, "Today is Sunday January 28, and it is safe to say that all of the primary work for God of War 2 has been completed. There are still bugs to be worked out as the game goes through the final bit of Quality Assurance, but for all intents and purposes I am done with everything I can do on the project."

To celebrate and get all pumped about the game, check out the new God of War II trailer on SPOnG via the links right here: