The budget software supremo speaks out 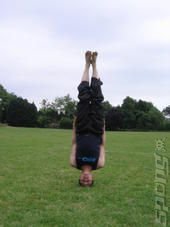 Leo 'The Ninja' Tan
All Images (3) »
Today, we bring you the latest in SPOnG?s poll of the year, with more thoughts and ruminations on the year just gone and the exciting one ahead of us from the great and the good of the UK's games industry.

Today, we have none other than value software supremo Garry Williams (MD of Sold Out Software), long-serving freelance journalist Steve Boxer (him with the hair!) and Activision?s new PR guru, Leo Tan (all pictured right and below).

SPOnG was contemplating nominating Garry Williams as our Man of the Year. However, when we asked him what TWO presents he wanted for Christmas, he typically gave us THREE answers. For this simple act of greed on his part, he is no longer our Man of 2006. Better luck next year Wodge!

Remember to keep checking in, as we'll be bringing you more poll results tomorrow and later next week (when we've recovered from Monday and Tuesday's turkey and baileys overload).

Plus of course, you can always let us know in the forums if you strongly (or even mildly) agree with, disagree with or don't really give a toss either way about what any of these guys has to say for themselves.


SPOnG: What are your (gaming and non-gaming) highlights from 2006?

SPOnG: Five things you're either looking forward to in 2007 or would like to see?

SPOnG: What two gifts would you most like to see in your Xmas stocking next Monday morning?

SPOnG: What do you plan to be doing at 4pm on Xmas day this year?