The best things in life are free. Except for everything thats good and costs money. 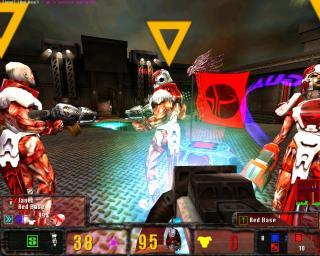 All Images (2) »
Less than a month after the launch of Id Software’s Quake 3: Team Arena add-on, the makers have released an additional four maps that have been designed especially for the update. One of best things about PC games is that titles often receive additional gameplay features and updates (and bug–fixes!) after the game is released. These can either come from the software house or from the games-playing community, and in this case, both. The game modifications from the Quake community range from new maps to gameplay variants like Jailbreak to and even whole new games using the Quake 3D Engine, like Quake Pinball and Chess.

The new maps are popular Arena maps that have been re-vamped to accommodate the new gameplay variations of Team Arena. The new maps feature new textures and game entities to add new visual appeal and include new weapons and power-ups. The programmers have also upgraded and polished up the maps. Support for more players at once is now included, depending on the power of the server, which is ideal for the larger maps.

These new maps are not going to cost you anything apart the amount of time it takes to download them. Point your mouse at www.planetquake.com and enjoy. You need a copy of the original Quake 3 and the Team Arena add-on to use the new maps.