Something for the Weekend, Sir? Games Out Today 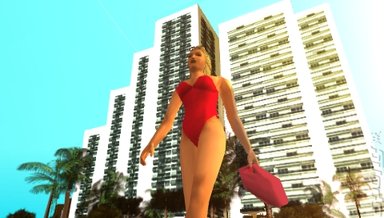 All Images (8) »
As we approach the season of gluttony and squandering (Ho ho ho. Santanic Ed.) there is always one thing that brightens and lightens our hearts in the SPOnG office. That is, the closer to our Lord The Little Baby Jesus? birthday greedfest we get, more and better games appear in the shops. It?s the rule ? and it used to work like that with telly.

So, today and this weekend, we urge you to run out and purchase one or more of the following crackers listed below:

For PSP owners it?s a golden weekend, with Rockstar?s Grand Theft Auto: Vice City Stories finally out and about. And it stars both Auf Wiedersehen Pet's Timothy Spall and none other than everyone?s least favourite baldy ?rocker? Phil Collins no less! But don?t let that put you off the game, as our Gareth has been playing it pretty much non-stop all week and is more than happy with it. So happy is he in fact that he?s not been able to put it down yet and put his thoughts onto the Internet via his brain and keyboard; so check back next week for our full VCS review.

The PSP goodness continues with Killzone from SCEE which Gareth is still raving about. You can read SPOnG?s full review of Killzone later this afternoon, with the following quote really summing up our take on it,? It sucks away the peripheral world, a world where blurting out, "'Ave some, you little $#!@!", isn't exactly appropriate due to the proximity of old ladies, small children and the over sensitive.?

If you are looking for something ?for the lady?, then look no further than what every woman must surely want, other than more lipstick and shoes, which is Buena Vista?s Desperate Housewives: The Game. In virtual Wisteria Close (Erm? Lane? so I am told. Ed.) you get to assume the role of the newest housewife with a perfectly manicured lawn. It is your mission to flirt, entertain and spy your way to the truth. Plus, it has gardening and cooking mini-games, which must be a first!

Finally, PS2 owners who feel in need of a workout might want to invest in EyeToy Kinetic Combat from Sony?s ever-reliable London Studio.

Kinetic Combat brings together the martial arts teaching of Hung Gar Kung Fu with a holistic fitness programme. So, basically you get your own virtual personal trainer who, in addition to making you into a rock hard ninja and helping you shed a few pounds, will also save you thousands of money-pounds, if you?re into that sort of thing.

Unlike Desperate Housewives who use cutting-hedge gardening technology, Kinetic Combat uses cutting-edge Motion Matching Technology, which tracks the player?s moves on screen with supreme precision. It can tell if a move is being performed correctly and gives personalised real-time feedback, both encouraging and constructive. Marcus has been taking a look at this interesting title for us, although as he is annoyingly super-fit and rock hard already, he?ll not see the benefit.

So there we go, a weekend of high crime in Vice City followed by a bit of nookie in the bushes at Wisteria Lane, topped off by an invigorating session of Hung Gar Kung Fu. Crime. Sex. Violence. It?s enough to make Jack Thompson?s blood boil!
Companies: Buena Vista Rockstar SCEE
Games: Killzone: Liberation